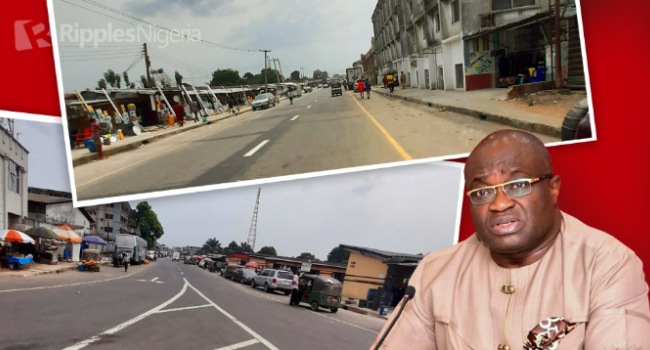 On January 22, officials of the Abia State government led by the Governor, Dr. Victor Okezie Ikpeazu, at a lavish ceremony said it commissioned a quaternary road in Aba, the economic nerve centre of the State. The four roads reported to have been repaired and commissioned included Eziukwu road, Milverton Avenue, Ojike Lane and Chisco Link road, all in Aba South Local Government Area of the state.

The commissioned roads were in continuation of Ikpeazu’s Urban Renewal Project. The project, according to the state government is targeted at giving dilapidated roads in Aba a facelift. Indeed, reports abound on how most roads in the commercial city cut a pitiable sight, appearing more like death traps.

Ripples Nigeria visited the said commissioned roads as publicised by the State Government. An on the spot assessment of the roads shows that Eziukwu road, beginning from Factory road down to Okigwe road roundabout, was repaired as reported, with signature dash lines on it – like the other roads – serving as lane demarcation.

Milverton Avenue, a hub for various transport companies conveying people to different parts of the country, was well-constructed as reported. Chisco Link road, short in length, which adjoins Milverton Avenue and Ojike Lane was also repaired, and tarred.

However, Ojike Lane, which adjoins Eziukwu road, was not completely repaired as publicised by the State Government. Ripples Nigeria observed that the construction of the road stopped at the spot where it is adjoined by Chisco Link road. The rest of the road was still left in its sandy and dusty state while refuse/litter of various sorts and pot holes litter it at different parts.

The non-completed state of Ojike Lane, refutes the claim by the Ikpeazu administration that four roads were fully completed and commissioned.

Ojike Lane (meeting point of the repaired and unrepaired sections)