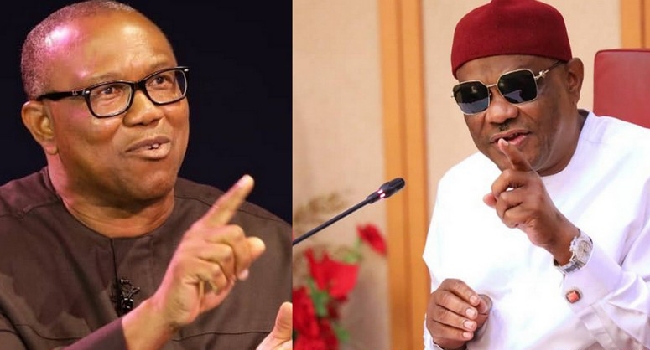 CLAIM: A facebook user recently claimed that Governor Nyesom Wike of Rivers States had endorsed the Presidential candidate of the Labour Party, Peter Obi, and also promised him votes in his state.

In the facebook post, which has multiple likes and shares, Wike was quoted to have pledged to give Obi votes from Rivers that would surpass those from Kaduna, Kano and Zamfara.

The post read: “The votes I will give Peter Obi in Rivers will collapse every vote (sic) coming in Kano and Kaduna with Zamfara combined – Wike”

The post was accompanied with a picture of Wike and Governor Samuel Ortom of Benue State wearing the same native attire and abeti-aja cap of the Yoruba people.

Ripples Nigeria could not find any trace of the quote in the media. Also, a google reversed image search of the attached picture shows that it was taken at the flag off campaign of Governor Seyi Makinde of Oyo State, who is seeking a second term in office. The campaign rally held at the Mapo Hall, Ibadan on Wednesday.

We found the recording of Wike’s address at the rally and nowhere in it did he endorse Peter Obi or promise him votes.

Wike, G5, and the 2023 Presidential election

Governor Wike is the leader of a protestant group of five governors of the PDP who are opposed to their party’s presidential candidate and its national leadership. They are tagged the G5 Governors. Other members of the group are: Abia State Governor, Okezie Ikpeazu; Benue State governor, Samuel Ortom, and Ifeanyi Ugwuanyi of Enugu State.

The claim that Governor Wike promised Obi votes in Rivers is false.

FACT CHECK: Was a player’s contract terminated for Ronaldo to have the number 7 jersey in Al-Nassr?