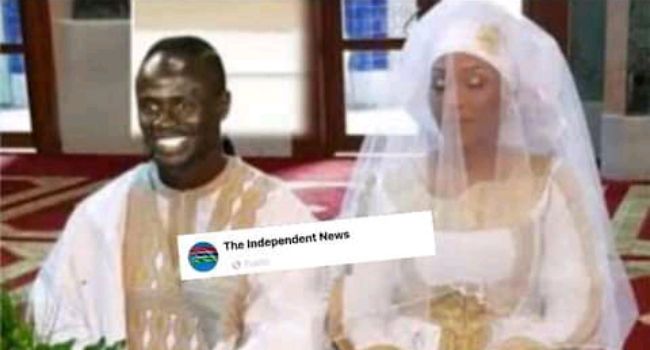 CLAIM: A viral image on Facebook purportedly shows the two-time African Footballer of the Year, Sadio Mane and a lady getting married.

VERDICT: False. The picture is altered.

In the picture, which is widely shared on Facebook, the Senegalese international with the lady tagged to be his fiancé, and identified as Fanta Touray, were sitting side by side in wedding regalia, inside a Mosque.

The picture was shared by Bayo News Network, a Facebook page with over 32,000 followers. It was attached to a post which read: “Congratulations to the king of African soccer Senegalese striker Sadio Mane who married his fiancé, a Gambian Madam Fanta Touray (from Brikama) yesterday at a Mosque in a low key ceremony in Germany.

The story read: “It could be recalled that a Senegal and Bayern striker Sadio Mané has revealed the character traits of the woman he wants to settle down with in June 2022 in an interview with a German journalist.

“Mané, arguably has one of the most discreet lifestyles among top football professionals in the world and when he was quizzed several times about why he has remained in bachelor life without a wife.

“The 30-year-old forward has remained coy with his response about the woman in her life [if there is any].

“However, Mané has given insight on the type of woman he wants to settle down with.  Sadio Mané has disclosed the attributes of a woman he desires as a wife, stating he wants to marry a woman who respects God.

“According to Sadio Mane he has been approached by uncountable women of all works of life including celebrities, ladies manning top positions and tycoons far richer than him to marry them but they are not within his criteria for wife.

“Whilst Sadio Mane has over 16 million followers on Facebook and ranks 5th most followed black person in the world after Rihanna, Ekon, Winfrey and Usain Bolt, but Senegalese strike wants a woman who is not addicted to social media platforms and Fanta Touray a Gambian in Germany happened to be that.

“He insists on settling down with a lady who is God-fearing and is not addicted to social media by posting regarding their lives,” the post concluded.

Read also: FACT-CHECK: Has Rivers State given PDP the highest votes since 1999 as claimed by Governor Wike?

The caption used for the image by The Independent News read: “Happening now in Germany. Sadio Mane with his new wife Fanta Touray from Brikama. Congratulations.”

Ripples Nigeria subjected the image to a Reversed Image Search and found that the image was altered to replace the original face with Mane’s.

The original image appeared in an article published on the Presse Côte d’Ivoire website on 8th August 2019. According to the article, the photo shows Soumahoro Ben Mamadou, Zouglou artist better known as Soum Bill and his wife Sarah Hélène Thérèse Daply in Abidjan renewing their marriage consent, 11 years after their union on Saturday, December 08, 2008.

“The Soumahoro dowry has been accepted by the Daply family on Wednesday, August 7, 2019, in Cocody-Attoban. A way to catch up on this important stage in the life of a couple, in the pure African tradition. Songs, dances and blessings accompanied Mamadou and Hélène,” part of the article reads.

The photo has also been used by several print-on-demand companies online to advertise their services.

Furthermore, neither the picture nor any post related to marriage, appeared on the player’s official social media handles.

The viral image on Facebook depicting Sadio Mane getting married is fake.

FACT-CHECK: Is Angolan currency stronger than naira, dollar as claimed by a Twitter user?

FACT-CHECK: Omokri compares Nigeria’s ranking on terrorism under Jonathan and Buhari. How correct is he?