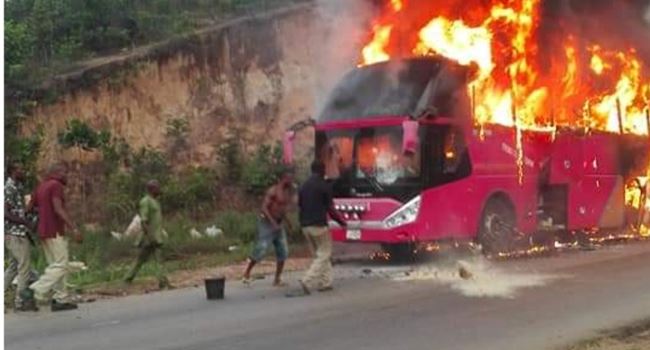 Viral WhatsApp message claimed some passengers of Igbo extraction traveling in a luxurious bus were attacked and killed in Jos, the Plateau State capital.

False. None of the pictures used to accompany the message was found to be true. Reverse image search showed they were all old pictures, regurgitated for fake news usage.

The last Saturday and Sunday of August 2021 did not pass without the multiple forwarded message of an attack on Igbos in Jos, involving about 230 persons said to have been traveling in luxurious buses.

“Every Igbo man in Jos right now should avoid Jos express road and stay indoors. If possible run to a church or Army barrack. There is an ongoing meeting in Enugu right now by Ohanaeze on how to convey you people back home as soon as possible.”

Two of the three pictures show two luxurious buses; one in red and the other in White, covered in flames.

Ripples Nigeria conducted a reverse image search and found out that the White luxurious bus was a crash that took place in Zimbabwe in April 2017 with 20 lives lost. The bus was heading to South Africa and collided with a truck.

The red bus belongs to the Young Shall Grow transport company. The bus caught fire in Umuahia in March 2019.

The third picture was traced to a 2015 publication with the headline; “Heavy Riot ongoing at Kogi State over Yahaya Bello’s Candidacy. It reported the violence that erupted when Yahaya Bello was chosen after the sudden death of the original flag bearer of the All progressives Congress (APC), Audu Abubakar.

On the same note, the police command in the state described the whole attack story in Jos as fake, as there were no records of such incident in the state.

“We urge members of the public to disregard and stop the spread of such fake news capable of inspiring unwarranted panic, hatred, negativity, chaos, and tribal conflict among the well-spirited residents of Plateau and Nigeria in general.

“On this note, we wish to reaffirm our resolve toward the provision of adequate security within the state and even beyond”, Ubah Ogaba, Police spokesperson in the state said.