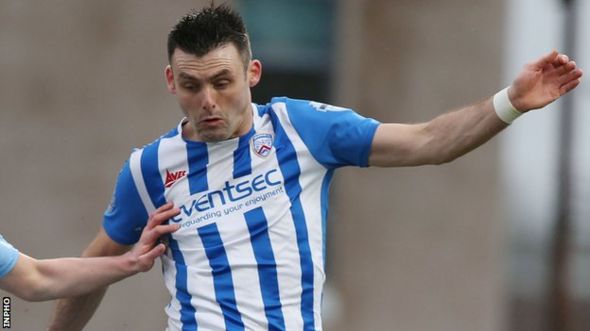 The Irish Football Association has handed a six-match ban on Coleraine striker, Eroin Bradley, for urinating on the pitch.

The incident occurred during the Irish Cup semi-final tie between Coleraine and Ballymena at the Windsor Park on July 27.

Bradley was found guilty of misconduct in respect of a breach of Article 17 of the Irish FA’s Articles of Association, which relate to bringing the game into disrepute.

Read Also: Mane on target as Liverpool fight back to beat Arsenal

In the game, he put Coleraine ahead from a free- kick, before substitute Kenny Kane equalised for Ballymena late in the game.

The game ended 1-1 at regulation time and neither side scored in extra-time. But Ballymena went on to win the game on penalty shootout.

“Skinner has a six game ban to fulfil – ideally we want to get through to the next round of NW Cup,” said the Bannsiders boss.

Coleraine are set to kick off their campaign this season in a tie against neighbours Portstewart.