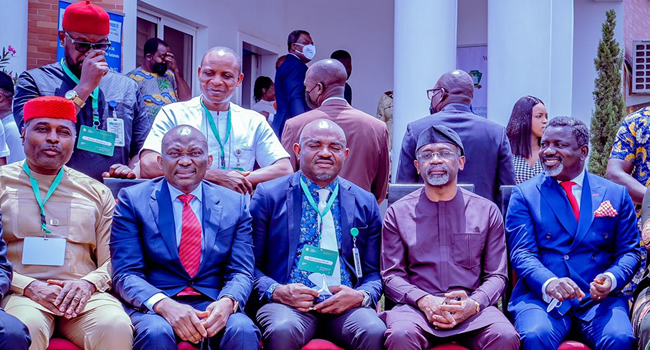 The Speaker of the House of Representatives, Femi Gbajabiamila; and Minority Leader of the House, Ndudi Elulemu, have called for more support for stakeholders in Nigeria’s entertainment industry, saying it was vital to boosting the nation’s economy.

According to them, the sector, especially Nollywood, has the potential of enhancing the Gross Domestic Products of the country, given its current rating in the movie industry globally.

The call was made in Abuja on Friday at the opening of a two-day leadership masterclass training for Nollywood actors sponsored by Elulemu.
Gbajabiamila said the training was positioned to improve the leadership capital of the stakeholders of the country’s movie industry, noting that with talent, fortitude and extraordinary resilience, actors have built a globally competitive entertainment industry, despite the unique challenges and constraints of the country’s environment.

He maintained that the industry has grown to become “a cornerstone of the national economy,” noting that the data released by Pricewaterhouse Coopers (PwC), in 2016, indicated that the film industry employed about 1 million workers and accounted for about 2.3 per cent ($600 million) of the country’s GDP, with over 2500 movies produced annually.

His words: “These are extraordinary numbers. Yet, they fall far short of what can be achieved given the right circumstances. With adequate investment, a supportive regulatory environment, better training and capacity development, Nollywood will grow beyond our present dreams and surpass our highest ambitions.

“It falls to all of us, in government, in the private sector and across society to identify the ways we can help the industry reach the heights we all know is possible.”

In his remarks, Elumelu said the training would provide the much needed strategic multi-sectoral effort to guarantee the desired rebound and repositioning of the movie industry in Nigeria.

He said, “Nollywood ranks as the second-largest movie industry in the world and indeed, the largest in Africa, providing over 1 million direct employment and much more business openings in the sectoral value chain, within and outside our country.

“I recall that under the PDP administration, our movie industry received boundless multi-sectoral support and synergy which resulted in a record productivity boost and unprecedented return to our GDP.

“Though there has been a serious decline from the 2.3 per cent GDP contribution recorded in reports released in 2016, to 0.27 in the first quarter of 2019, I believe that with concerted effort and cross fertilisation of idea in training such as this, the industry will surely rebound.”