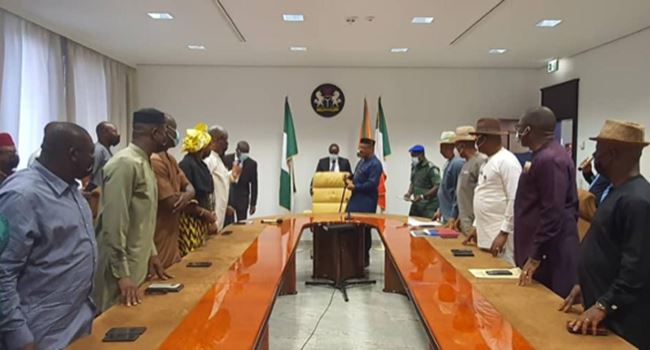 The Zonal Working Committee of the Peoples Democratic Party (PDP) South South has asked the governors of the South-South of Nigeria to push for the establishment of state police force.

S’south PDP, led by its National Vice Chairman, Chief Dan Orbih, made the call while on a working visit to Akwa Ibom State On Thursday.

Addressing the governor and members of the party at the state Government House, Orbih expressed alarm over the statement of President Muhammadu Buhari, where he told state governors to combat the menace of banditry and herdsmen themselves instead of waiting for the Federal Government.

He also commended the governor for proactive leadership and development of Akwa Ibom State, and hinted on PDP’s resolve to win the Presidential elections of 2023.

His words “I am here today with the members of the South South Zonal working committee to appreciate you for the good work you are doing for our party in your state and our zone. We urge you not to relent in what you are doing for the people.

“What you did in your first term in office gave you victory for your second term and what you are doing now in your second term will earn the party victory at the next election. At a time of economic recession, you have brought your sound financial background as a seasoned banker to bear in the management of state resources.

“Our country is going through hard times. Economic recession, all time high exchange rate, kidnapping and abduction of innocent citizens is the order of the day; herdsmen atrocities, unknown gunmen unleashing terror on our people, and even threats of war and secession.

“Government at the centre is carrying on as if all is well. All is not well. We urge you and your colleagues in the South South Zone to push for the establishment of state police to confront the security challenges we are currently going through. We welcome the Asaba declaration banning open grazing and urge you to initiate an executive bill backing the Asaba declaration.

“We were in Calabar last weekend on a solidarity visit, we are happy to report to you that the party is strong and with the right support will shall reclaim the Government of the state.

“As we move closer to 2023. We call for a more united South South Zone that will ensure victory for our Party come 2023”, Orbih said.

Responding, Governor Udom Emmanuel revealed that the 13 percent derivation for oil producing states have continued to be diverted by the Federal government to pay oil subsidies.

Complaining of paucity of funds, he however, expressed gratitude to God that his government was still able to pay salaries, as well as bring the dividends of democracy to people of the state.

The Governor expressed gratitude to the PDP for giving him an opportunity to develop Akwa Ibom State. He reassured the leaders of the party that he, alongside the other S’south governors will ensure that, not only will Cross River State be recovered from the opposition, but that they will work in unity to deliver a PDP president to Nigerians in 2023.

He also promised to take the security request of the zonal party leadership to his fellow governors.

Related Topics:BuhariState Police
Up Next

There is no conflict between Buhari, Tinubu —Presidency