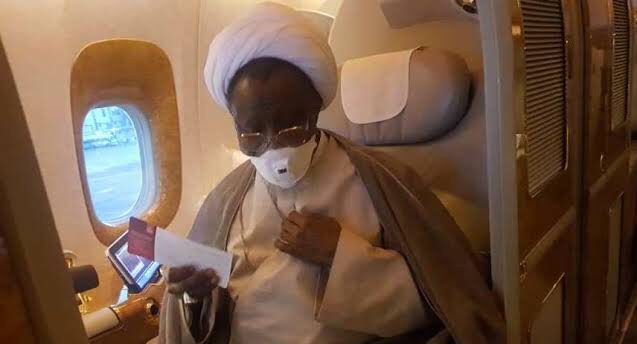 Just three days after he left the country for medical treatment in New Delhi, India, the leader of the Islamic Movement in Nigeria, Sheikh Ibraheem El-Zakzaky, has reportedly discharged himself from the Medenta Hospital and is now on his way back to Nigeria.

This brings to an abrupt end a drama-filled failed medical trip by the controversial IMN leader. It remains to be seen what the next developments will be from this latest unexpected twist in the seeming unending saga.

“Sheikh Zakzaky is returning to Nigeria from India. 22:00 hours Delhi, 17:00 hours in Abuja Nigeria,” the movement tweeted on Thursday.

President of the IMN Media Forum, Ibrahim Musa, in a statement, blamed the Federal Government for scuttling the IMN leader’s planned treatment.

Musa said, “Following lack of a breakthrough in the impasse that ensued in the treatment in New Delhi of Sheikh Ibraheem Zakzaky, it is now confirmed that the Sheikh is on his way back to Abuja.

“In a video message sent through his office, the Sheikh said it was decided that they will be taken to the airport to be flown back to Nigeria.

“He has left Delhi by 17:00 Nigerian time.” He prayed that “may that be the best option in the circumstances.”

The group added, “The Nigerian government’s interference and scuttling of the whole process rather than supervision as ordered by the court is the direct cause of the impasse.

“The government never wanted the medical leave in the first place, and did whatever to stop it by all means possible,” Musa alleged.

Recall that the Federal Government had earlier confirmed that the Indian authorities expressed willingness to return El-Zakzaky back to Nigeria with immediate effect for fear of his internationalising his group’s activities in the country.

This was revealed in a statement by the permanent secretary, ministry of information and culture, Grace Isu Gekpe.

Gekpe said El-Zakzaky’s cry that he was being held in circumstances worse than when he was in Nigeria should be disregarded because since arriving in India he had refused to subject himself to preliminary medical checks.