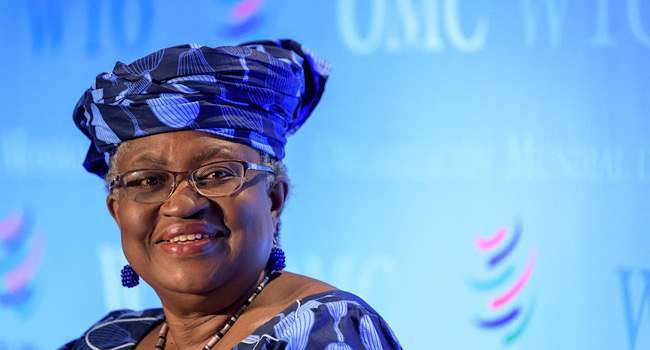 Nigeria’s former minister of Finance, Ngozi Okonjo-Iweala has been confirmed as the Director-General of the World Trade Organization (WTO) on Monday, three months after the Donald Trump administration rejected her candidacy.

Her appointment makes her the first woman and first African to lead the 24-year-old trade body.

As expected, she was confirmed unanimously at the convening of special general council meeting on Monday .

Announcing her appointment, WTO tweeted,
BREAKING: Ngozi Okonjo-Iweala from Nigeria is appointed as the next WTO Director-General. Dr. Okonjo-Iweala makes history as the first woman and the first African to lead the WTO. Her term starts on the 1st of March 2021.”

Okonjo in her new position will need to broker international trade talks in the face of persistent U.S.-China conflict; respond to pressure to reform trade rules; and counter protectionism heightened by the COVID-19 pandemic.

“She brings stature, she brings experience, a network, and a temperament of trying to get things done, which is quite a welcome lot in my view,” former WTO chief Pascal Lamy told Reuters. “I think she’s a good choice.”

Key to her success will be her ability to operate in the centre of a “U.S.-EU-China triangle” he added.

Taking on apparently insurmountable challenges is something of a habit for Okonjo- Iweala.

In 2003, when she left her job as vice-president of the World Bank to return to Nigeria as finance minister, Nigeria was mired in debt.

Despite the unfavorable conditions faced, Okonjo was able to renegotiate Nigeria‘s mounting Paris club debt in October 2005, and a final agreement for debt relief worth $18 billion.

A position Okonjo- Iweala highlighted in a recent interview with TIMES Magazine.

“I feel I can solve the problems. I’m a known reformer, not someone who talks about it,” she said. “I’ve actually done it”.

Any advantage for Nigeria with Okonjo at the helm of WTO?

Directly for Nigeria No, indirectly yes.

The WTO works toward promoting trade globally, meaning top of the agenda for Okonjo will be the African Continental Free Trade Area (AfCFTA) which Nigeria is likely to benefit from her leadership.

“I think that the negotiations of the ACFTA have been done in a way as to be complimentary to WTO, so that WTO can help the continent do better”, she noted in an interview.

“A paltry 17 per cent of African exports are intra-continental, compared with 59 per cent for Asia and 68 per cent for Europe. Intra-African exports have a higher value-added content. If that proportion were raised, Africa’s industrial base would improve and it would stand a better chance of integration in the global supply chain.”

Indeed, having an African at the helm of the WTO might help on the margins.

Okonjo-Iweala was born in Nigeria in 1954, then under British colonial control, and received her primary education there before coming to the U.S. to study, first as an undergraduate at Harvard and later a PhD student at MIT.

She worked in the U.S. after graduating, addressing the challenges posed to economies in the Global South while working as a development economist at the World Bank. In 2003, she began a three-year stint as Nigeria’s finance minister; a role returned to in 2011.