Like a house of cards, the food palliatives fall | Ripples Nigeria 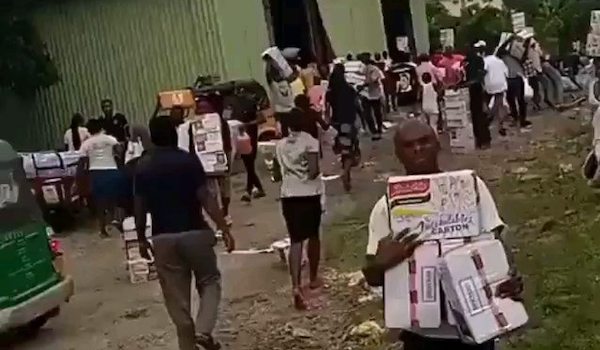 This is indeed a tumultuous period for our dear country, while we are struggling to wriggle out of negative effects of the Covid-19 pandemic amidst dwindling resources, then came flood that washed away several hectares of farmlands across the country with North West region the worse hit, the result of which is an imminent food shortage in the country. As if that was not enough, then came an upsurge in the spate of kidnappings and banditry in the Northern region further crippling an already fragile agricultural sector and the economy at large.

The Federal Government had to explore additional means to either cut spending or increase income or both in order to effectively run the country, and justifiably so, they deregulated the petroleum sector and reviewed some policies in the power sector in order to drastically reduce government spending which resulted in petroleum and power hike in the country. In order to cushion the effect of these lurid miasma of challenges on the ordinary Nigerians, the Federal Government rolled out several programs to alleviate these sufferings on its people, most notable with potpourri of voices talking about was the massive distribution of tons of food materials as palliative for distribution to Nigerians across all states of the federation during the Covid-19 lockdown period.

As usual, the country needed a culprit and accusing fingers were directed at the source of distribution; the Ministry of Humanitarian Affairs, Disaster Management and Social Development with the Honorable Minister, Hajiya Sadiya Umar Farouq facing a barrage of criticism, condemnation and accusation of mismanagement, insults and sometimes even name calling on her handling of the distribution. The minister however insisted that she personally supervised the distribution of food palliatives for Covid-19 to all states of the Federation including the Federal Capital Territory. But the more she tried to shed more light on the distribution, the more she provoked Nigerians who believed that her ministry was responsible for either mismanagement of the food palliatives or diversion of the funds meant for such program.

Amidst these troubling times came rounds of protests in the country with Nigerians taking to the streets demanding an end to the special anti-robbery squad (SARS) of the Nigerian Police Force, end to police brutality, end to bad governance and also end to insecurities bedeviling the Northern part of the country among others. Albeit these protests were peaceful and well-coordinated ab-initio, they were later hijacked by hoodlums in some parts of the country turning violent, resulting in the loss of lives and wanton destruction of properties. My sincere heartfelt condolence to the victims of this unfortunate incident.

Were these protests justifiable or have they achieved their desired aim and objectives is a discussion for another day, but the massive looting, killings and destruction that came after is highly condemnable in its entity and I urge the government to do all that is necessary to restore peace back to our land and bring the perpetrators of these crimes to book.

These unwanted acts however led to the discovery and subsequent ‘looting’ of warehouses filled to the brim with food items meant to be distributed to poor Nigerians during the Covid-19 lockdown across some states. This is dispiriting and incomprehensible, more so the fact that Nigerians were dying of hunger during the lockdown period. What justification will the hoarders of these palliatives give? The pesky questions they need to answer Nigerians are; that they hoarded these food items because they couldn’t see or find Nigerians that are hungry during the period? Or that they waited because the ones they could find were either not hungry enough or deserving of the food palliative? How do they look themselves every day in the mirror knowing they are hoarding food materials meant for the poor while the poor die of hunger? How do they sleep at night knowing fully well that millions of Nigerians will go to bed hungry as a result of their unfathomable actions? Indeed Nigerians deserve an explanation on this matter

Over the years, we have paid too much attention and mounted much pressure on the Federal Government that we so often tolerate and condone the excesses and wanton misappropriation of resources by our leaders at the lower level of governance. We overlook their ineptitude with false excuses and turn the other way while they plunder our resources with their immediate families. They have displayed gross insouciance to the downtrodden amongst us and lack of innovation, imagination and creativity. We must demand accountability, transparency and good governance from them more than the Federal Government.

Before we exit this indecorous spot we are in right now as a country, we must eschew sentiments, greed and emotionalism in order to demand for good governance from our leaders especially at the grassroots. We must pay equal or more attention to how we elect these leaders at the grassroots like we do to the ones at the Federal level. We must elect leaders with fire in their bellies and humanity in their hearts that will stir the affairs of this country and also prioritize unity, education and human capital development. Long live the Federal Republic of Nigeria.

TINUBU: When The Godfather Took A Hit