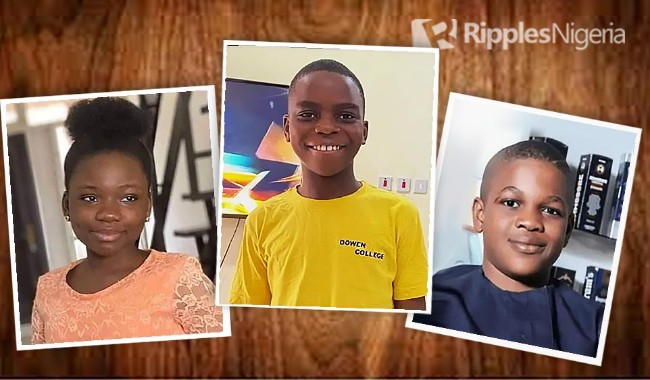 The unfortunate and most certainly, avoidable death of Sylvester Oromoni (Jnr), a 12-year-old student of Dowen College, on November 28, apparently from injuries sustained after he was allegedly tortured by senior students, has, once again, shown the collective failure to protect the Nigerian child by the government, the society, the schools, and ultimately, the parents.

The death of Sylvester in the most controversial circumstances, as expected, brought with it public outrage, consternation and widespread condemnation with parents, government, and concerned citizens expressing their shock and anger.

As usual, hashtags like #JusticeForSylvester have sprung up with human right activists trying to outdo one another in expressing their grieve over the unfortunate incident.

But in the midst of all the hullaballoo, one pertinent point is that Sylvester was failed by almost every stratum of the society, including the family, the society, the Nigerian government, and the educational system.

He was barely 12-years-old when he was cut down in his prime. He was a child who should have been protected, but we all failed and let him down. He is not the only one who has been let down.

The case of Sylvester is not the only instance where a Nigerian child has been failed by the elements. There are so many but for the purpose of this peace, we will bring you three of such instances.

Late last year, the story of Don Davis Archibong, an 11-year-old, a JSS 1 student of Deeper Life High School, Uyo, Akwa Ibom State, made the headlines and raged like a wild fire when the mother, Deborah Okezie, raised the alarm over the sexual molestation and bullying of the boy by senior students and teachers in the school.

In a video clip released by his mother, Davis narrated his experience in the hands of two of the senior students whom he identified as Ola and Shalom.

He explained that senior students serially assaulted him by inserting their hands into his anus whenever others were sleeping. He also narrated how a teacher in the school, whom he identified as Mr Akpan, would also assault and starve him, beating him with belts, sticks and stones.

“He beats me with anything he sees. Mr Akpan beats me because I wet my bed. One day that Mr Akpan was beating me, Mr Michael (another teacher) came to ‘bail me’. Mr Michael asked if Akpan wanted to kill me, and Mr Akpan said he didn’t care.
“Mr Akpan will also starve me whenever it is time to eat. Mr Akpan sends me to go back to the hostel to get something. It’s a way of starving me.”

READ ALSO: LongRead… The Keyamo metamorphosis: From activist to apologist, and all we know

In a video the mother also made which went viral, she narrated how the students sexually assaulted her son.
“They will remove his boxer and push their hands into his anus. Look at a child I sent to school, he came back with a broken anus.
“People who have children in boarding schools don’t know what these children go through. Boarding schools of these days are not like the boarding school of those days,” Okezie said in the video.

The Don Davis case may see justice prevail at the end though, as the school principal, and four others, including the vice principal and housemasters, have been charged to court by the Akwa Ibom State government for their involvement in the starvation and sexual abuse of Don Archibong. They have been remanded in prison custody pending when they meet their bail conditions.

In June, Nigerians were also jolted with the case of a 12-year-old girl, Karen-Happuch Aondodoo Akpagher, a student of Premier Academy, Lugbe, Abuja, who was allegedly raped in the school, a situation that eventually led to her death.

The girl was said to have taken ill in school and was unable to walk, but when she was eventually rushed to the hospital by her mother, doctors observed a discharge from her vagina, and this was found to be from a condom that was stuck in her private part.

Her urine also revealed dead spermatozoa, a condition which ultimately led to her death. Since then, her parents and women rights groups have been calling for justice but the case is still shrouded in secrecy as the school which is said to belong to a top government official, has continued to come up with different versions of the story.

At some point, the school management found it convenient to blame every other person but itself, especially the social media for misinforming the public and peddling “unfounded statements.”

In August, there was a case that was almost lost to the headlines where a 13-year-old student of the Federal Government College, Kwali, in the Kuje Area Council of the Federal Capital Territory, Abuja, Yahaya Aliyu, was reportedly beaten to death by a female teacher in the school for failing to do his assignment.

A colleague of the late boy had reportedly recounted what happened on the fateful day:
“On Monday, August 9, Aliyu was not feeling well and had visited the school clinic for treatment. He was unable to get treatment because he had not eaten that day. Aliyu went back to class; his colleagues were submitting their assignments then and his teacher requested for Aliyu’s own but he didn’t complete it.
“The teacher gave him a punishment to serve and she later used a bucket handle on him. He was hit with on his head several times.
“After he was released, he put his head on his table. Some of his colleagues noticed that he was quiet and they checked on him. They raised the alarm to the authorities and he was rushed to the hospital. That was how he died. We learnt later in the day that students in the school protested on the premises of the school,” the student said.

While we mourn the unfortunate death of Sylvester, all must be worried about the moral decadence that has taken over and permeated the Nigerian society. There must be a civic responsibility and moral obligation to advocate for human rights, fairness, transparency and justice in this matter or any other matter.

The Nigerian system has the unenviable reputation of serially failing its vulnerable, albeit most precious ones, a group Sylvester and the rest belong to.

On the first score, Nigeria’s educational system failed these kids. The schools that ought to protect them, shirked in their responsibilities and watched as they struggled to live.

The society also failed them as their deaths highlighted the failure and the decadence that is prevalent today, as witnessed in the total collapse of ethics that is always associated with saner societies.

The Nigerian system has become one where anything goes, where high premium is no longer placed on morality but on mundane things that do not add value to the fiber of decency.

The Nigerian school system failed these unfortunate kids as standards have fallen below expectation, while evil has overtaken not just the education sector, but virtually every segment of society.

The government did not only fail to protect them but has performed woefully in attempts to raise the standard of education in the country, a malaise that has forced the privileged few to send their children to Europe and the Americas while neglecting the system back home.

It is not out of place to argue that Nigerias educational system is in dire straits while governments at all levels continue to pay lip service to the sector every year.

The story of Sylvester, Karen, Don and other unfortunate kids have, once again, opened a Pandora box and is clearly an inflection point for all schools in the country, both private and public.

Nigerian parents must also partly share in this emerging rot. It is undeniable that the near collapse of family values in the society has had negative effects on the youth as children tend to copy the bad behaviors of their parents.

LongRead… Clamour for self-defence rising, as bandits overrun Nigeria. What we know so far

LongRead… The Keyamo metamorphosis: From activist to apologist, and all we know