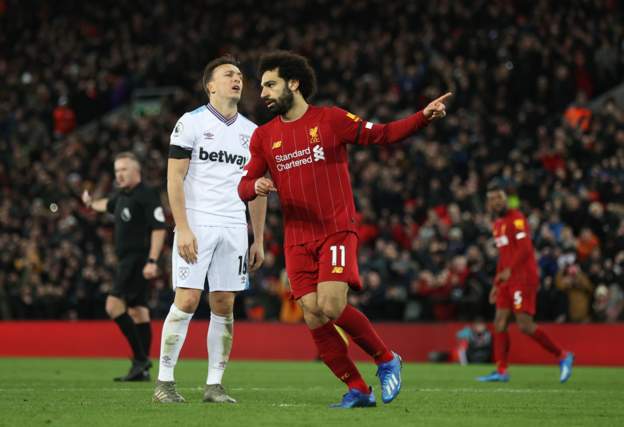 English Premier League leaders, Liverpool survived a scare from West Ham to maintain their unbeaten run in the league as they fought back to win 3-2.

At 54 minutes, West Ham were leading 2-1, but goals from Mohamed Salah and Sadio Mane secured a comeback win for Liverpool.

The Jurgen Klopp side, which last dropped points in a 1-1 draw with Manchester United last October, now equal the Premier League record of 18 successive wins set by Manchester City.

And with Monday’s victory over West Hame, the Anfield club are four wins away from clinching the Premier League title – their first in 30 years.

Read Also: EUROPA: Inter to host Ludogorets behind closed doors because of coronavirus

Liverpool took the lead through Gini Wijnaldum header in the 9th minute but Issa Diop’s header equalised for the visitors in the 12th minute before substitute Pablo Fornals swept West Ham into the lead nine minutes after the break.

West Ham keeper Fabianski inexplicably allowed Salah’s shot to squirm through his legs in the 68th minute as Liverpool leveled.

Mane then turned in the winner with nine minutes left after Trent Alexander-Arnold lofted the ball over Fabianski.

The Reds have now gone 28 games in the Premier League without defeat.

They have now restored their 22-point lead at the top of the table while the Hammers are left in the bottom three.