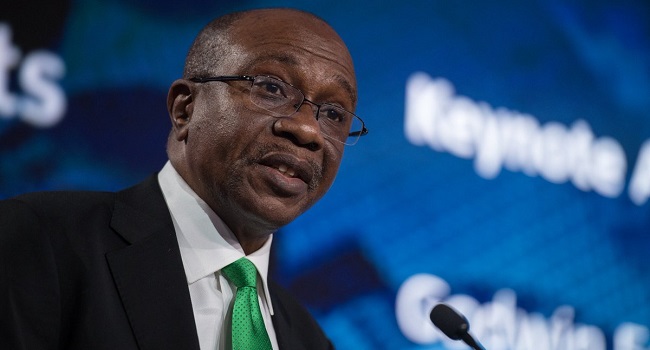 The Governor of the Central Bank of Nigeria (CBN), Godwin Emefiele, said on Saturday the Federal Government needed about $100 billion annually to address the nation’s infrastructure deficit.

He stated this at the 30th Anniversary Conference and Awards of the Finance Correspondents Association of Nigeria (FICAN) held in Ikeja, Lagos.

Emefiele, who was represented at the forum by the CBN’s Director of Corporate Communications, Osita Nwanisobi, said the lack of access to quality infrastructure had been a limiting factor to Micro, Small, and Medium Enterprises (MSMEs) in developing countries delivering on their potential for growth and employment creation.

He said: “In Nigeria, the current level of infrastructure deficit is a major constraint to economic development and attainment of growth average rate of at least five to seven percent required to boost productivity and sustainable growth for businesses.

“According to the World Development Indicators (2019), 56.20 percent of Nigerians have access to electricity, while electric power consumption stood at 144.52 kWh per capita as of 2018.

“While infrastructure deficit in Nigeria is estimated to be about 1.2 percent of GDP, it is projected that the Federal Government needs to commit about US$100 billion annually to address the nation’s infrastructural deficit.”

The CBN governor added that a survey by Price Waterhouse Coopers (PWC) revealed that the formal MSMEs had been identified to contribute about 40 percent of Gross Domestic Product (GDP) in emerging economies, including Nigeria.

Emefiele added: “Beyond infrastructure, access to finance remained one of the biggest threats to MSME development in both developed and developing economies alike with serious implications for productivity, economic development, and job creation.

“The survey also showed that access to credit had been identified as a critical enabler for the growth and development of MSMEs in developing countries.

“The overall credit gap for MSMEs was estimated to be $5.2 trillion, representing 19 percent of these countries’ cumulative GDP (IFC).

“Of this, the unmet financing demand from MSMEs in Sub-Saharan Africa is about $331 billion, representing 18 percent of the potential demand for credit by MSMEs in the region.”

Related Topics:#featuredCBNGodwin Emefiele
Up Next