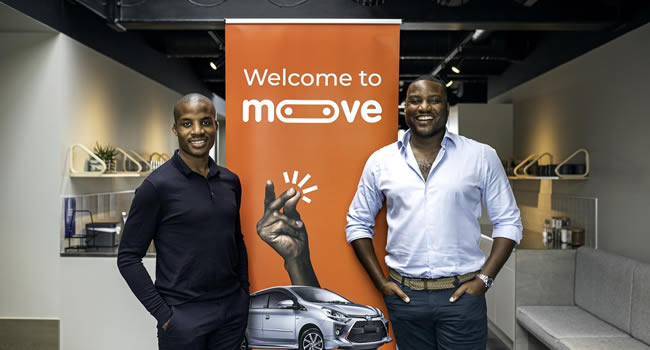 Moove, Nigerian mobility startup, has announced closing a US$63.2 million Series A.

The funding, which comes as a debt and equity funding round, is expected to help it expand more quickly.

The startup was cofounded by British-born Nigerians Ladi Delano and Jide Odunsi.

Since its venture, Moove has been democratising vehicle ownership in Africa by providing revenue-based vehicle financing to mobility entrepreneurs.

Today, the startup embeds its alternative credit-scoring technology onto ride-hailing and e-logistics platforms.

The new technology of Moove allows access to proprietary performance and revenue analytics of mobility entrepreneurs to underwrite loans.

Egyptian fintech startup Cassbana, has completed plans to scale its venture in a bid to provided more than 10,000 loans across 14 cities.

The startup builds financial identities for the underserved and unbanked communities.

Cassbana was founded in June of last year as a venture using machine learning and AI to offer financial identities for underserved and unbanked consumers.

With its technology and data, Cassbana offers financial institutions and companies the opportunity to create innovative lending and financial support solutions by analysing consumer behaviour patterns.

The company initially launched its services on a trial basis with one service provider in Cairo, but in one year has now facilitated 10,000 loans across 14 cities, with a 1.6 per cent default rate.

Speaking on the development, Haitham Nassar, founder and chief executive officer (CEO) of Cassbana, stated that the startup is building a behaviour-based scoring system and smart data analysis scheme that is the future of data-based financial advisory.

He said: “By developing mobile technology and data science algorithms, Cassbana disrupts the way financial identities are being built within the modern financial sector. The main goal of Cassbana is to reach and penetrate underbanked segments in growing markets in MEA, through using alternative data, network behaviour and instant credit.”

Global Endeavor network, having gained access to various support services to help their companies scale, has accepted new founders of tech startups based in Egypt and Nigeria into its fold.

Since launch, the initiative has accepted a host of African entrepreneurs into its network in recent years.

Nigerian startups continued to be welcomed by Endeavor, with the 16th vISP, held June 20-23, seeing the selection of Tosin Eniolorunda and Felix Ike, founders of TeamApt, which is reinventing banking and financial services to serve the next billion Africans.

Hacker jokingly steals $600m worth of crypto on Poly Network, then returns it

Nigeria’s Chekkit secures $500k pre-seed funding round. 2 other things and a trivia