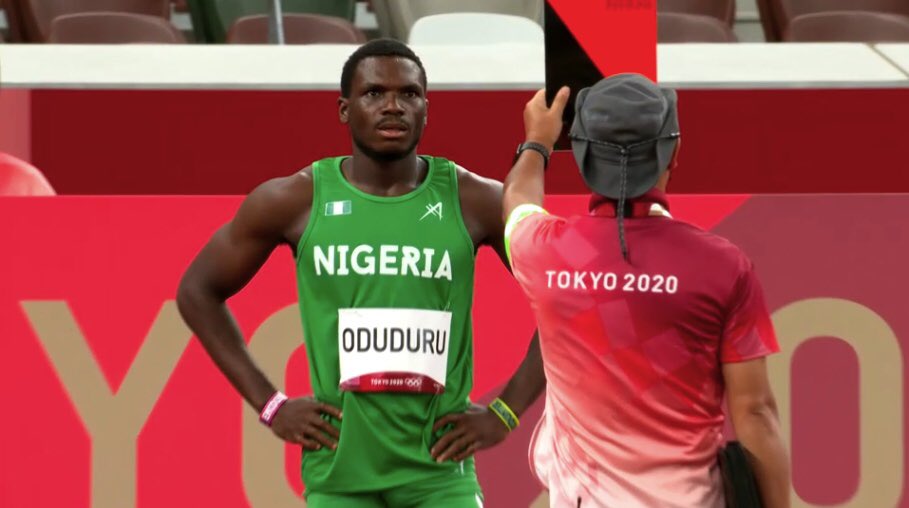 It’s been a day of disappointments for Team Nigeria at the Tokyo Olympics on Saturday as Divine Oduduru has been disqualified from the men’s 100m event.

Earlier on Saturday, top Nigerian sprinter, Blessing Okagbare had also been disqualified from the women’s race despite already reaching the semifinal.

Okagbare was shown the door by the Athletics Integrity Unit (AIU) for failing a doping test.

But there was good news after all, as in the 100m men’s race, Enoch Adegoke joined the exclusive club of sub-10 seconds runners after he raced home first in 9.98 seconds in his first round heat to qualify for the semi-final.

Adegoke, who ran a historic 10.00 seconds last month to win the Nigeria 100m title, was under pressure to match the impressive performance of Grace Nwokocha in the women’s 100m after both dominated the Nigerian local athletics circuit like never before.

The 21-year-old lived up to expectations, beating in the process, the fastest man in the world this year and seventh fastest of all-time, USA’s Trayvon Brommel, who tops the pre-Games world list with the 9.77 seconds he ran last month in Florida, USA.

Also through to the semifinal is Nigeria’s third entrant in the 100m event, Ushoritse Itshekiri, who placed third in his first round heat.

Both Nigerians will be looking to become the next duo that will make the final of the event at the games after Davidson Ezinwa and Olapade Adeniken did in the 1990s.

Meanwhile Nwokocha, who had ran her season best in the heat on Friday, failed to advance to the women’s 100m final after finishing fifth in her semifinal heat with another sub- 11.10 seconds performance, the second in two days.

The 20-year-old performance has been remarkable after becoming the fastest Nigeria based athlete since Mercy Nku ran 11.04 seconds in 1997 in Benin City.

In the 100m hurdles Tobi Amusan ran 12.72 seconds to win her first round heat and keep her hope of becoming the second Nigerian to win a sprint hurdles medal at the Olympics after Glory Alozie won a silver medal in Sydney in 2000.

The 24-year-old has been drawn to run from lane five in the first semifinal heat at 11.45 am (Nigeria time) on Saturday.