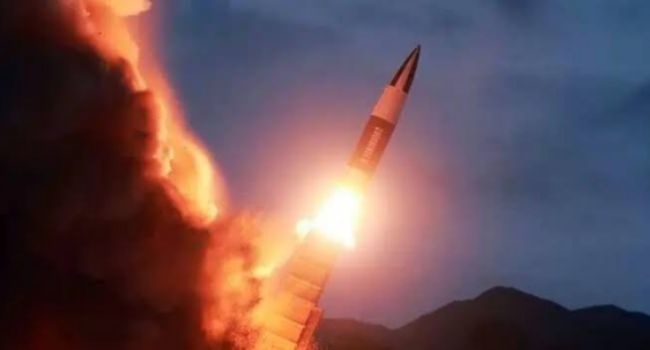 North Korea, Thursday, fired its first intercontinental ballistic missile (ICBM) since 2017, more than four years after its last release, as world leaders gather in Brussels, Belgium, for a security summit.

The suspected ICBM which flew to an altitude of 6,000 kilometers (3,728 miles) and to a distance of 1,080 kilometers (671 miles) with a flight time of 71 minutes before splashing down in waters off Japan’s western coast, was personally supervised by the country’s leader, Kim Jong Un, according to Japan’s Defense Ministry.

Thursday’s launch of the ICBM is North Korea’s 11th of the year, including one it fired on March 16, which was not a complete success.

However, analysts said the recent test could be the longest-range missile yet fired by North Korea, exceeding its last ICBM launch in November 2017.

Japan’s Vice Defense Minister Makoto Oniki told reporters shortly after that the missile’s altitude would suggest it is a “new type of ICBM,” a potential sign North Korea is closer to “developing weapons capable of targeting the United States.”

Meanwhile, the United States has joined its Asian allies, South Korea and Japan in strongly condemning the launch and called on North Korea to refrain from further destabilizing acts.

According to security analysts, the recent spate of North Korean missile tests would suggest Kim Jong Un is “attempting to show an increasingly turbulent world that Pyongyang remains a player in the struggle for power and influence.”

“North Korea refuses to be ignored and may be trying to take advantage of global preoccupation with the war in Ukraine to force a fait accompli on its status as a nuclear weapons state,” Leif-Eric Easley, associate professor of international studies at Ewha Womans University in Seoul, told CNN.

In response to the ICBM test, South Korea’s military also launched several warning missiles for the first time since 2017, the Joint Chiefs of Staff (JCS) said in a text sent to reporters.

“Our military is monitoring North Korean military’s movements and have confirmed that we have the capability and posture to accurately strike the origin location of the missile launch and command and support facilities any time North Korea launches a missile,” the JCS said.

US first female Secretary of State, Madeleine Albright, dies at 84