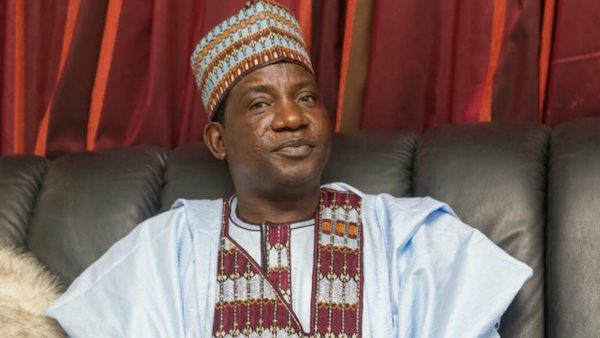 The Ataa Aten, Yakubu Chaimai, the paramount ruler of Ganawuri on Tuesday sought the leave of a Plateau State High Court to be joined as co-defender in the suit challenging Governor Simon Lalong’s attempt to tamper with the Gbong Gwom Jos stool, the News Agency of Nigeria (NAN) reports.

Gov Lalong had created two traditional councils out of the Jos Traditional Council, which did not go down well with the Berom nation, which filed a case challenging such action.

Seven of the “illustrious sons of Berom nation”, had on May 23 dragged the state government before Justice Christine Dabup of State High Court, over its attempt at tampering with the composition of the Gbong Gwom Jos Traditional Council.

Consequently, the court on May 23 issued an interim injunction stopping Lalong from tampering with the composition of the Gbong Gwom Jos Traditional Council.

Joined in the suit are the Plateau State Government as the first defendant, while the state Attorney General and Commissioner for Local Government and Chieftaincy Affairs are second and third defendants.

When the case came up for hearing on Tuesday, Chaimai, through his counsel, Mr Titus Mann, announced his appearance and wished to be joined in the case as as a co- defendant.

“My Lord, l am Titus Mann, counsel to the Ataa Aten of Ganawuri, who wish to be joined as a co-defender in this matter.

“We have already filed our processes with a motion on notice to join in the case,” Mann announced.

Mr Edward Pwajok (SAN), the plaintiffs’ lead counsel, had earlier told the court that the case was for hearing, but that he had received three different motions from the defendants.

“My Lord, we have a motion on notice that we hope to move today, but for the three motions we have just been served with, we cannot go on simply because we need to study them and reply to them.

“While one of motions seeks for the setting aside of the interim injunction this court had issued, another is seeking for an extension of time to reply to our motion on notice.

“The third one is the motion on notice by Mr Titus Mann seeking to join on behalf of the Ataa Aten of Ganawuri as co-defender.

“Your Lordship, in view of the fact that there is need for us to formally reply to these processes in the interest of justice, we hereby apply for a very short adjournment during which we would have responded to all the processes, “ Pwajok solicited.

Responding, the state Attorney-General, Mr Chrysanthus Ahmadu, counsel to the defendants, who was represented by Mrs Rauta Dakota, a Director in the Justice Ministry, said: “That’s the true position of things My Lord.”

“We have filed two motions; one seeking for an extension of time to reply to plaintiffs motion on notice and the second asking the court to set aside the interim injunction it issued to the plaintiffs.

“Therefore, we are not objecting to the application for an adjournment,” She said.

Pwajok, however, notified the court of the interim injunction which he said still subsists pending the determination of the case.

After listening to the parties involved, Justice Dabup adjourned the case to June 24 for hearing.