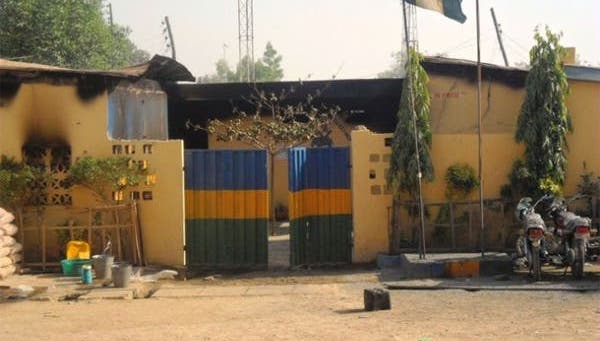 The Mbaise Divisional Police Headquarters in Imo State was Thursday night set ablaze by suspected hoodlums, causing policemen on duty and detainees to take to their heels.

According to reports, on arrival, the hoodlums, carrying inflammable objects, threw them at the police formation and ignited the environment.

The development was said to have caused panic in the area as the policemen on guard, suspects, and natives ran into nearby bushes, just as files and other documents at the police facility were said to have been burnt.

A source at the scene said: “This is very strange. Fleeing hoodlums have just razed Aboh Mbaise Divisional Police headquarters. They didn’t bother going into the compound. They just threw ignitable objects on the Divisional headquarters and drove off few minutes after it caught fire.

“All the policemen on duty including suspects who were being detained ran into the nearby bushes. Locals also fled their homes as the fire raged. We have not seen this one before.”

Confirming the attack of the station, the spokesman of the Imo State Police Command said no policeman was lost to the incident.

It would be recalled that two other attacks on police formations in the South-East state of Abia were carried out during the week, leading to the death of two policemen in one of the attacks by unknown persons.

Related Topics:#featuredhoodlumsimo police station
Up Next

Varsity workers sign agreement with FG, to call off strike