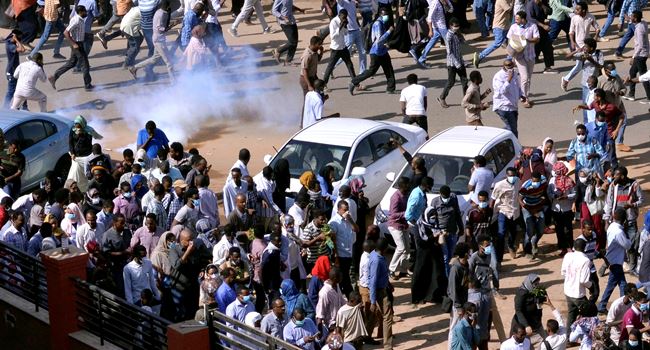 Demonstrators in Sudan on Monday took to the streets in Khartoum district to protest against the killing of a civilian allegedly by paramilitaries the previous day.

Al Jazeera disclosed that the civilian was killed when residents gathered in El-Souk to demand that members of the feared paramilitary Rapid Support Forces leave the town, according to residents and doctors close to the protest movement.

The paramilitaries allegedly opened fire at the demonstrators.

The rally, which came hours after another protest was broken up by police in the city, was against the killing of a civilian on Sunday in the town of El-Souk in the state of Sinnar, southeast of Khartoum.

Read also: Iran ready for talks with US if sanctions are lifted, President Rouhani says

Earlier on Monday, about 200 protesters chanting “civilian rule” held a separate rally at a bus station in downtown Khartoum over the El-Souk violence before being dispersed by riot police who fired tear gas at them.

Witnesses also revealed that riot police beat several protesters and loaded them into trucks, while large numbers of police were deployed in the area.

Monday’s demonstrations in the capital came as protest leaders and the country’s ruling military council are working out the finer details of power-sharing agreement reached between the two sides earlier this month.

But it has been alleged that negotiations have been postponed twice following requests from protest leaders.
They are now scheduled to take place on Tuesday.