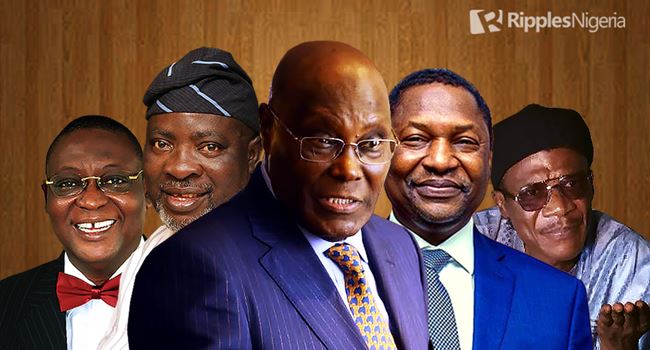 With less than 18 months to the 2023 presidential election, the discourse on who succeeds President Muhammadu Buhari is becoming increasingly interesting with each passing day.

The Chairman of the South-West Agenda (SWAGA) 2023, Prince Dayo Adeyeye, during the week took his campaign for the All Progressives Congress (APC) National Leader, Bola Tinubu, to another level with his declaration on the latter’s chances at the poll.

These and four other stories we tracked were among the major highlights on national issues last week.

Adeyeye, a former chieftain of the PDP, boldly declared on October 8 that the ex-Lagos State governor already had 12 million South-West votes in the bag ahead of the 2023 presidential election.

Adeyeye, who drew an analogy on President Buhari’s triumphant 2015 campaign, projected that with 12 million votes from the region in 2023, his principal would have a smooth ride to the Presidential Villa in less than 18 months from now.

The former Minister of State for Works remark raises concerns about the integrity of the forthcoming presidential poll. Could Adeyeye be speaking to ready-made results given that the Nigerian electoral process has been held as flawed 22 years after the country returned to democratic rule?

Indeed, the ugly side of his posturing is that it may deepen the widespread belief that election results are prepared even before the electorates drop their votes in the ballot boxes.

With the ruling party perceived as being firmly in control of Nigeria’s political space, Adeyeye’s promise of 12 million votes for the APC national leader several months before the election may just be the answer to a question which is yet in the works.

2. PDP zoning of chairmanship to North

The PDP NEC on October 7 approved the zoning of the party’s chairmanship position to the North.

This came just a few days after a party’s zoning committee headed by the Enugu State Governor, Ifeanyi Ugwuanyi, recommended the zoning of the position to the North.

The PDP National Publicity Secretary, Kola Ologbondiyan, who confirmed the development to journalists, however, clarified that what the NEC approved was not about the executive and legislative positions in the 2023 general elections but the National Working Committee (NWC) positions in the October 30 convention.

The ratification of the zoning arrangement confirms the permutations of pundits that the party was considering the emergence of a southerner as president in 2023 if it emerges tops at the polls.

Read also: QuickRead: Sanusi’s warning on 2023 presidency. Four other stories we tracked and why they matter

It is also a signal that the leadership recruitment process in Nigeria is still woven around the primordial sentiment of ethnicity and religion.

It suggests, therefore, that the country may yet be far from jettisoning mediocrity for merit in the selection of its leaders.

Speaking at the 94th National Executive Committee (NEC) of the main opposition party in Abuja on Thursday, the former Vice-President of Nigeria argued that the zoning of the 2023 presidential ticket has never been the cause of the country’s problem nor will it be the solution.

The former Vice President’s remark suggests that he may still have a design for the 2023 presidency.

It should not surprise anyone if Atiku pitches a tent with another party in his bid to fulfill the lifetime dream of becoming Nigeria’s President.

4. State of Emergency in Anambra

The Attorney-General of the Federation and Minister of Justice, Abubakar Malami, stirred the hornet nest when he tinkered with the idea of declaring a state of emergency in the volatile Anambra State.

The AGF, who addressed State House correspondents at the end of the Federal Executive Council (FEC) meeting in Abuja on October 7, said, among others: “When our national security is attacked, and the sanctity of our constitutionally-guaranteed democracy is threatened, no possibility is ruled out.”

Malami’s remarks may just have betrayed the strategic plans of the ruling party in its quest to dominate the state which is currently under the control of All Progressives Grand Alliance (APGA).

If the security situation in Anambra does not improve in the days leading to the state’s governorship election slated for November 6 election, no one should be surprised if the government declares a state of emergency in the state considering the body language of the country’s chief law officer who has also been supported by the Minister of Information and Culture, Lai Mohammed.

The Coalition of Northern Groups (CNG) on October 4 warned political parties in the country against zoning their presidential tickets in 2023.

The coalition spokesman, Abdul-Azeez Suleiman, who addressed journalists at a media briefing in Abuja said:

“Since democracy everywhere is a game of numbers, under no circumstance will the North succumb to intimidation, blackmail, or threat from any quarter to abandon its collective franchise by not seeking the presidency in 2023 or any time in the future.

“The Northern population which is in the clear majority will never accept any presidential candidate who is the product of an undemocratic zoning process from whichever party.”

The coalition’s threat which came a few days after the Northern Governors’ Forum publicly rejected the idea of power shift further sheds light on the widening cracks between and among the country’s federating units.

The worrisome development is a pointer to a larger malaise which would continue to threaten the country’s cohesion and stability unless a genuine national dialogue is held to address fears of injustice and inequity.

QuickRead: PANDEF’s position on power shift. Four other stories we tracked and why they matter

QuickRead: Sanusi’s warning on 2023 presidency. Four other stories we tracked and why they matter