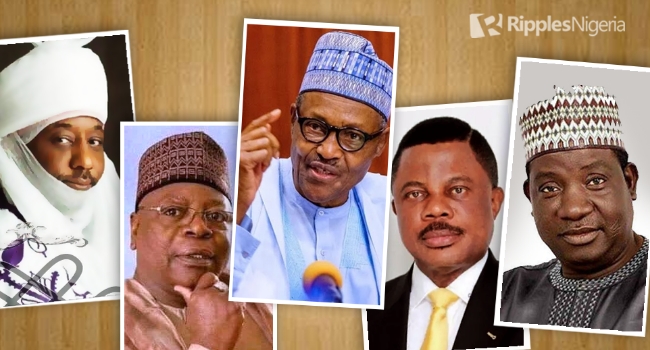 As the debate on the zoning of the Nigerian presidency in 2023 continues unabated across political divides, the deposed Emir of Kano, Sanusi Lamido Sanusi, last week, warned the parties on the danger of zoning their ticket for the country’s highest political office to any particular region(s).

And, after several months of waiting, the Federal Government finally lifted the ban on the micro-blogging platform, Twitter, albeit with conditions.

These and three other stories we tracked dominated national discourse last week.

On October 1, Sanusi, the outspoken former Governor of the Central Bank of Nigeria (CBN), aligned with the neutrals who had always declared their preference for merit ahead of zoning on the choice of individuals who will carry the flags of various political parties in the 2023 presidential election.

The deposed monarch, who appeared on Arise TV, said zoning of political offices, especially for President would present the country with a choice of selecting between two or three mediocre candidates.

He said: “At the end of the exercise, you end up with Nigeria being presented with two equally useless candidates.
“Let us have their names. Those of them, who want to be president of Nigeria, show your face whether you are from the north or the south.”

The ongoing conversations on the zoning of political offices have further confirmed that Nigeria’s leadership recruitment process remains flawed and driven largely by primordial sentiments of ethnicity and religious beliefs.

The zoning arrangement was a compromise option between the North and South in response to the political debacle thrown up by the controversial annulment of the June 12, 1993, presidential election.

Just like Sanusi advocated, merit and not zoning or religious leanings should be the ultimate requirement in the choice of any person for the exalted seat of the Nigerian President.

The Nigerian Government had on June 4 banned Twitter over the alleged use of the platform for activities threatening the country’s corporate existence.
Buhari, who ordered the lifting of the ban in his independence anniversary address, said: “Following the extensive engagements, I have directed that the suspension of Twitter be lifted but only if the conditions are met to allow our citizens continue the use of the platform for business and positive engagements.”

The lifting of Twitter suspension with conditions suggests that the Buhari administration may be trying to buy time on freedom of expression in Nigeria.

The development signals that the ban is still on and if Twitter chooses to run policies or activities that go against the conditions including the payment of taxes, setting up a local office, and cooperating with the government on regulation of content and harmful tweets, the suspension will be back in full effect.

The killings reached a worrisome height with the murder of Dr. Chike Akunyili, widower of the late Director-General of the National Agency for Food and Drug Administration and Control (NAFDAC), Dora Akunyili, in broad daylight on September, 29 by unknown gunmen.

Read also: QuickRead: Baba-Ahmed and ‘lazy’ southern politicians. Four other stories we tracked and why they matter

Why it matters
The rising violence in Anambra may not be unconnected with the state’s governorship election slated for November 6.

The wanton destruction of lives and properties shows a sickening culture among political actors to resolve issues through the gun rather than the ballot.

The instability may also be indicative of the of rise of other anti-democratic forces like IPOB that have threatened to make conduct of guber election impossible in Anambra State.

The Senate on September 29 asked President Muhammadu Buhari to declare the bandits wreaking havoc in the North-West as terrorists.

The call followed the adoption of a motion sponsored by Senator Ibrahim Gobir and co-sponsored by eight other senators at the plenary.

Why it matters
The Senate demand brings to fore the frustration of Nigerians over the Federal Government’s inability to deal decisively with the bandits who had put the will of the nation’s institutions, including the security agencies, to test.

It also speaks to government’s seeming double-faced approach in its containment policy of perceived enemies of state, especially those threatening the country’s sovereignty.

Indeed, the disposition of the Senate, is a call on the Nigerian government to raise its game in promoting justice and equity in the land.

The Chairman of the Northern Governors’ Forum, Simon Lalong, who disclosed this in a statement issued at the end of the forum’s meeting in Kaduna, said his colleagues declared their support for the Federal Government on the controversial issue.

Why it matters
Central to the dispute over VAT is the unresolved issue of fiscal federalism that has dogged the relationship between and among the components of the Nigerian federation.

Indeed, the controversy over VAT shows that 61 years after independence the cracks between the North and South have continued to widen over a poor definition of who owns or gets what in the Nigerian project.

A resort to the Supreme Court is a clear reminder that the country must insist on the rule of law and continue to strengthen its democratic institutions.

QuickRead: Adeyeye’s 12m votes for Tinubu. Four other stories we tracked and why they matter

QuickRead: Baba-Ahmed and ‘lazy’ southern politicians. Four other stories we tracked and why they matter