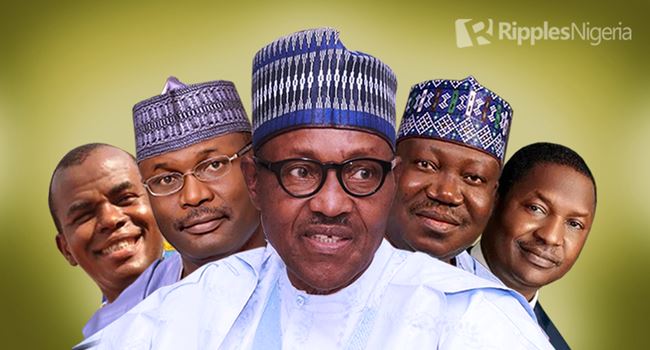 Among these were the porous hypothesis by the Attorney General of the Federation (AGF), Abubakar Malami, on the Lekki shootings and the northern governor’s position on social media.

These and three other political developments caught our attention. We examine, as usual, their implications for national development.

The Attorney-General of the Federation (AGF) and Minister of Justice, Abubakar Malami, on Monday, November 2, said that it was possible hoodlums and not soldiers shot unarmed and peaceful #EndSARS protesters at Lekki tollgate in Lagos on October 20.

Speaking with newsmen in Abuja, Malami had said that it would be “pre-emptive” to conclude there was even shooting at Lekki tollgate, adding, “you cannot rule out the possibility of perhaps hoodlums that set in to create a scene…”

It is easy to see through Malami’s struggles at defending an odious act by the military wing of the Nigerian establishment. His puerile conspiracy theory represents a grand but futile attempt at covering up what has been acknowledged as brutal repression by the Buhari administration.

The attempt to weave a fresh narrative is already rubbished by Nigerian Army’s tacit acceptance that its soldiers were deployed to the tollgate at the behest of the Lagos State government. Denying that its men never shot at protesters or may have done so with blank bullets remains a leaking argument.

Malami’s ruinous hypothesis must be seen, therefore, for what it is… a grand plan to perpetuate a lie and pull the wool over the eyes of Nigerians who already see through the lies of the Army and the Lagos State government.

The Northern Governors’ Forum, at the end of their meeting in Kaduna State on Monday, November 2, claimed that the social media has had “devastating” effects on the country and called for its censorship.

The governors, who in a communiqué issued at the end of the meeting, declared that Nigeria’s unity was non- negotiable, condemned the recent #EndSARS protests and said that it was designed to bring about a change in government.

The unapologetic resolve by some opportunistic politicians across divides to see national issues from the narrow prism of ethnic and religious biases continues to show how ignorance is being weaponized and used to deepen the country’s fault lines.

The northern governors stance on social media, therefore, serves as a notice to young Nigerians that the next big war is going to be fought over who controls the social media space.

It is clear then that the youth are up against a generation determined to muzzle their voices and frustrate the emergence of a new Nigeria built on merit, excellence and devoid of parochial leanings on religion or ethnicity.

The nation must brace for the long standoff between its determined youths and a fading political class whose stock in trade is weaponization of poverty and ignorance.

The Senate Committee on Federal Character and Intergovernmental Affairs, on Thursday, November 5, expressed anger over Buhari and other top government officials penchant for medical tourism.

The lawmakers who made their position known when the State House Permanent Secretary, Tijani Umar, appeared before them to defend his 2021 budget estimates put at N19.7 billion, out of which N1.3 billion was proposed for the State House Clinic, urged the presidency to restrain Buhari and others from medical tourism.

The ranting over President Buhari’s trips abroad for medical treatment speaks to burgeoning corruption within the system.

The frequent foreign medical visits by Buhari, in particular, is a pointer to the fact he and his team do not trust the country’s healthcare system, even with all the money sunk into the sector annually.

While the Senators may have made their points, it is doubtful that they expect any radical change in behaviour.

At the most, the raised voices remain mere rants as long as there is no legislation to back what the lawmakers are pushing for.

Perhaps, it may also be proper to perish any thoughts of any Act being legislated in the near future as the National Assembly looks and acts as an extended arm of the executive.

The chairman of the Independent National Electoral Commission (INEC), Mahmood Yakubu on Wednesday, November 4, declared that electronic voting machines would be deployed during the 2021 Anambra State governorship election.

Yakubu told newsmen in Abuja after appearing before the House of Reps Committee on INEC to defend the commission’s 2021 budget proposal, “It is difficult to give you an idea of cost or when the process would be concluded, but we are determined that we are going to deploy electronic voting machines, electronic balloting machines very soon in our elections. Possibly beginning with the Anambra governorship election next year”

Technology is an enabler, and it is just right that Nigeria’s electoral body is thinking and investing in that direction. The hope is that if implemented, it would aid transparency and raise the bar of integrity of the country’s electoral processes.

The challenge before the electoral umpire, however, lies in making efforts to ensure that there is proper legislation in place to enforce the initiative.

It is worrisome that the Card Reader after many years of its introduction is still not recognised by law.

So, the major worry should be how to get President Buhari, whose refusal to sign the electoral amendment act into law has continued to frustrate the transition to electronic voting, give his assent to the use of advanced technology.

Rev. Fr. Ejike Mbaka of the Adoration Ministry, Enugu, on Sunday, November 1, lamented that President Buhari had encircled himself with “criminals and hooligans; people who do not just tell him lies, but rather magnify lies.”

In his message titled, “Impure Heart” and delivered at Adoration ground during the 2020 All Saints Day Holy Mass, Mbaka regretted how security agents allegedly killed several #EndSARS protesters in Enugu and threw their corpses into the Onyeama valleys in the state.

The controversial Enugu cleric may have only stated the obvious.

Mbaka speaks to the age-old problem of Nigeria’s political leaders. They permit sycophancy and revel in the praises of hangers-on, and the cleric cannot totally absolve himself from the same crowd.

Past and present leaders have often shut themselves in and ignored the real world, only to confront the start realities when they are forced out of their comfort zones.

Mbaka isn’t the only one wondering. Many Nigerians do! One case that brings the shame home was Buhari’s recent national broadcast, following the aftermath of the EndSARS protest, where he failed to empathize with wounded protesters or grieving families.

It is unlikely the country’s political leaders will stop playing the Ostrich anytime soon. The will continue to pretend that all is well, even when it is too obvious that the country is thoroughly stewed in crisis.

BUSINESS ROUNDUP: Company sues Access Bank; Naira weakens against dollar on black market; See other stories that made our pick