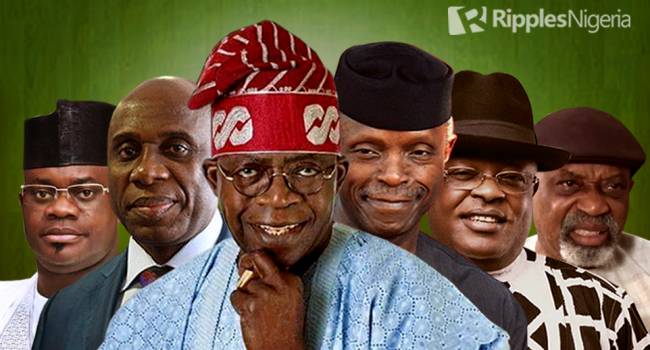 The competition for who will pilot the affairs of Africa’s most populous nation is in full gear.
In Nigerian politics, money speaks, and this time very loudly, especially for aspirants under the ruling party, the All-Progressive Congress (APC).

On Wednesday, APC spokesperson Felix Morka announced that the cost of presidential expression of interest and nomination forms was N30 million and N70 million respectively, making a total of N100 million.

Morka made the disclosure at the end of the emergency National Executive Committee (NEC) meeting in Abuja attended by President Muhammadu Buhari.

While there is no doubt that the vast majority of the aforementioned aspirants will be eager to purchase the form, the concern is where the money will come from, and why the candidates are willing to throw so much money at a project they are unsure about.

The Revenue Mobilisation, Allocation and Fiscal Commission is entitled by law to set the salary benchmark for political office holders.
Since the last review in 2007, the Commission had made attempts in 2009 and 2015 to review the package to no avail.

A review is currently on going but the publicly available data obtained from the commission’s website show the total salary for the position of a president stands at N14.058m yearly or N1.171m monthly, which comes to about N112.46 million in 8 years.

Because determining the wealth and assets of the aspirants contextually is difficult, we will use the last publicly held office to calculate the financial cost of picking up the APC nomination form N100 million form.

The Current Vice president of Nigeria, according to RMFAC earns a salary of N12.126m yearly or N1.01m monthly.

What this means is that Osinbajo in the last seven years as Vice President would have earned N84.8 million as salary, not enough for the N100m APC nomination form.

From 1999 to 2007, Tinubu served as the governor of Lagos state, and it was difficult to determine how much he earned.

RMFAC data reviewed in 2009 show a salary of N7.78 million for a sitting Governor which equates to about N648,580 per month.

What this means is that if Tinubu had earned the stated salary for 8 years, amounting to about N62.2 million, this would mean N38 million shot of the N100m APC nomination form.

Amaechi as a two-term governor earned N7.78 million yearly, which comes to N62.2 million.
As a House of Assembly member, it is estimated he earned about N2.47 million (N19 million in the 8-year period)

Giving a breakdown he said, “A minister earns only N950, 000 a month. Out of this money, N350, 000 is for accommodation, so there is no more money given to you. The remaining N600, 000 includes payment for your staff, personal assistants and all that.”

Read also: RipplesMetrics: Easter in 2022 is like no other, as Nigerians struggle to feed and save. (See stats)

Should we take his word, N950,000 monthly comes to N7.98million/year. For Ngige, who also serves as a minister under the administration of president Buhari, he would have received same salary with Amaechi in the last seven years.

Bello has been the Governor of Kogi State since 2016. Using data from RMFAC, his annual salary is N7.78 million.

What this means is that since assuming office, Yaya Bello would have earned N46.6 million, N46 million short of the N100m APC nomination form.

He is currently serving as the Governor of Ebonyi State and has been on the job since 2015. During this period to date he has been paid a total salary amounting to N54.4 million.

As a former Imo State Governor, Rochas Okorocha was paid N62.2 million as salary for his 8-year tenure.

Currently he is a senator and receives annual payment of N12.76 million. So far, he has received a total payment of N25.52 million having been elected a senator since June 2019.

His total earnings as a governor, combined with what he has received as a Senator, is not enough to pay for the presidential form of the APC.

Ken Nnamani and former Abia State governor Orji Uzor Kalu have also declared intention to contest for the most exalted seat in Nigeria.

The above calculations provide a metrics showing that what they both received as political office holders cannot pay for their presidential form.

The Human Rights Writers Association of Nigeria (HURIWA) has called on EFCC and the ICPC to probe the source of wealth of any presidential aspirant who picks the APC presidential nomination and expression of interest forms.

The group said only corrupt politicians could afford that much for a nomination form.

“Anyone who buys the nomination form at such a scandalous amount should be arrested and handed over to law enforcement agencies such as EFCC or ICPC or the Nigeria Police Force for investigation on the source of the money,” said HURIWA.

It further added, “We only just finished carpeting the opposition PDP for bastardising the process of nominating its presidential candidate by inflating the cost of its nomination form to ₦40m, little did we know that the politicians who run the Federal Government and have ruined the national economy will peg theirs at the extravagant cost of ₦100m.

“This same APC government is unable to meet the funding obligations for federal universities and thereby has left millions of students of public schools to roam around in their homes due to industrial strike by university teachers for over two months.

“It is a shame that those who seek to govern Nigeria are made to cough out so much money to purchase forms just to signpost their original intention as persons whose only objective would be to first recoup their huge investments and to further impoverish the citizenry.”

RipplesMetrics: 2023 elections set to be Nigeria’s most expensive, as INEC increases spending plan by N104bn

ICYMI…RipplesMetrics: Easter in 2022 is like no other, as Nigerians struggle to feed and save. (See stats)