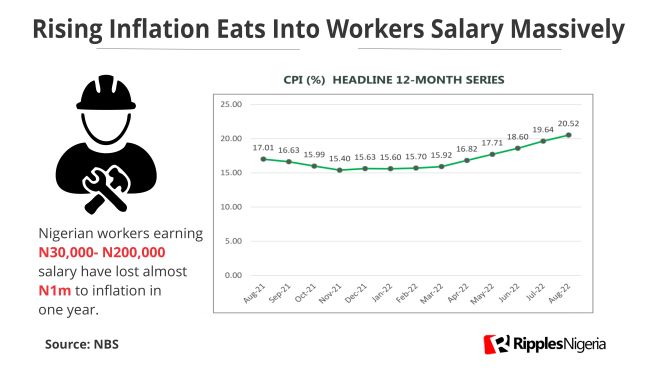 On Friday last week, the National Bureau of Statistics (NBS) announced Nigeria’s headline inflation rose 20.52 percent in August 2022 on a year-on-year basis. This is the highest level it has been since 2005.

For many Nigerians, it is just another number. However, a closer examination of the inflation figures provides an insight into the economic pressure faced by Nigerian workers.

This pressure is even made worse for a Nigerian worker within a salary range of N30,000 to N200,000 in the last one year.

The National Minimum Wage is set at N30,000 per month, or N360,000 per year.
When the annual salary is adjusted for inflation, the take-home pay of an average worker within that salary is reduced by N61,295 in real terms.

Economists calculate workers’ real income by dividing their wages by the annual inflation rate. It is calculated as [Wages / (1 + 20.62%) = Real Income].

According to job websites analysis, the average starting salary of Nigerian graduates is at N100,000.
For a graduate who celebrated securing a job a year ago at N100,000 monthly and N1.2 million annually, what that salary can now buy has dropped by a whopping N204,315 as of the end of August 2022.

For a N150,000 monthly salary earner or N1.8 million annually, the latest inflation figure means the annual salary is now N1.49 million. This comes to N124,460 monthly pay in real terms and a reduction of N306,472 on annual basis.

For a Nigerian worker earning N200,000, the expected annual pay is N2.4 million.
But with inflation at 20.52 percent the annual pay is only N1.99 million meaning the economy has cut off over N400,000 from the salary of the worker.

According to him the economy is still heavily dependent on oil revenue and importation and not yet fully diversified. He projected that inflation could hit as high as 44.51 if the National Bureau of Statistics attempts to reconstruct Nigeria’s inflation calculation.

“The weights of the components in the basket for evaluating the periodic Consumer Price Index (CPI) ought to be reviewed every five years to reflect the changing households’ consumption patterns especially in the face of COVID 19 which altered spending patterns as well as Nigeria’s changing demographics,” he argued.

Rewane also chided President Buhari’s leadership style saying it is making Nigerians poorer when compared to other past presidents.

He said that the average GDP growth rate was 7.7 per cent, 7.1 per cent, 5.5 per cent and 1.1 per cent under the administrations of Obasanjo, Yar’Adua, Jonathan and Buhari respectively.

Also, the average inflation rate was 12.19 per cent, 13.18 per cent, 9.70 per cent and 14.07 per cent under the administrations of Obasanjo, Yar’Adua, Jonathan and Buhari respectively.

Moreover, the percentage change in exchange rate during the duration of each presidents was 26 per cent, 27.4 per cent, 63.5 per cent and 150.2 per cent for Obasanjo, Yar’Adua, Jonathan and Buhari.

Furthermore, in his comparison, Rewane also showed that the external reserves at the end of the tenures of Obasanjo, Yar’Adua, Jonathan and Buhari stood at $43.17 billion, $32.34 billion, $28.57 billion and $39.18 billion respectively.