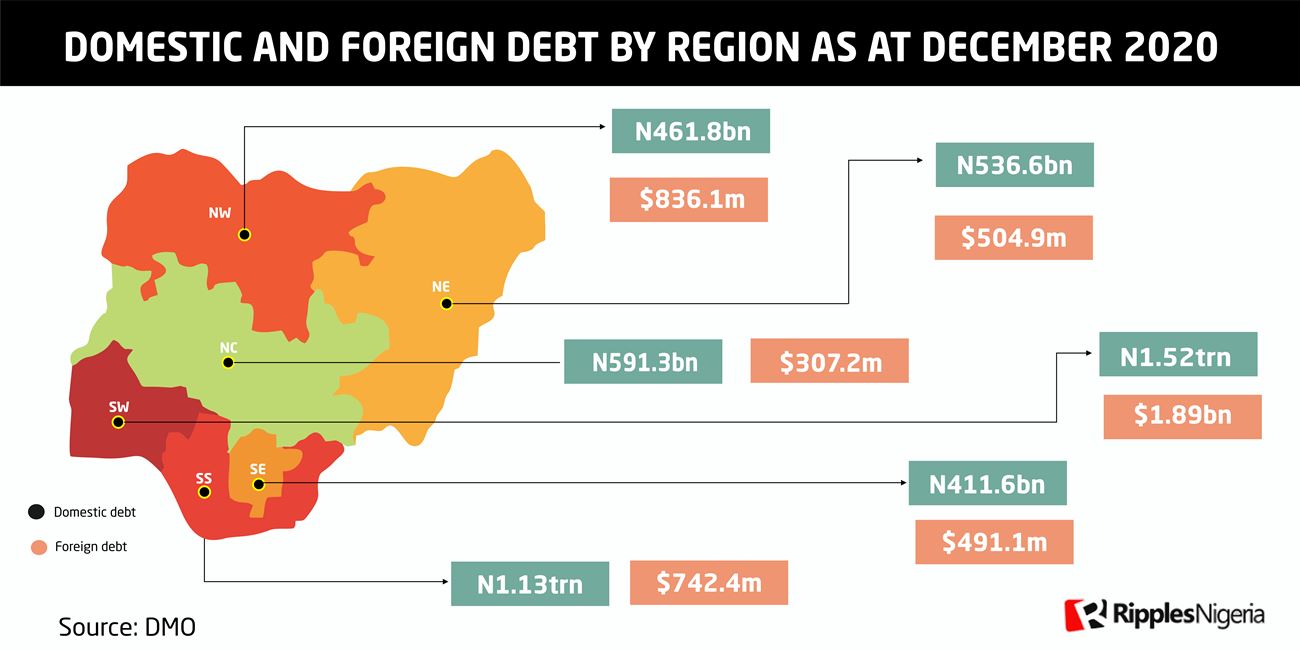 According to official figures obtained from the Debt Management Office, the six geopolitical zones of the country currently have a total states domestic debt of N4.18 trillion and US$4.77 billion external debt.

The South-West alone has a domestic debt burden of N1.52 trillion, accounting for 25.2 per cent of the country’s total subnational domestic debt.

The South-West states, without Lagos, have the third highest combined domestic debts in the country, with total domestic debts of N541 billion, behind South-South and North-Central.

However, when Lagos debt is added, the total domestic debts in the South-West region dwarfs other regions.

The size of the Lagos State economy, estimated at over US$136 billion, dwarfs all the other states in the region, while its strong revenue generation capacity gives it greater room to accumulate debts.

Breakdown shows Lagos State accounts for 44 percent of South-West region’s indebtedness with N508.77 billion domestic debt, although this represents a drop from the N542.23 billion recorded as at March 2019.

Ekiti State with a domestic debt of N84.7 billion and US$103.3 million external debt Is the lowest in the South-West region.

The South-West debt burden is closely followed by South-South region with a domestic debt of N1.13 trillion and US$742.4 million foreign debt.

This means that on the average, they are relatively richer than many other states outside the region.

The states have, however, also complained that their geographical terrain means that average cost of projects in the region is significantly higher than in many other areas.

However, many analysts also believe that corruption plays a key part in the high cost of contracts dished out in the region.

The North Central region, including the Federal Capital Territory (FCT) has the third highest domestic debts in the country, if Lagos is included in South-West numbers.

The region is exposed to a total domestic debts of N591.3 billion. Plateau is the most indebted in the region, with total debts of N137.7 billion.

States in the North-Central region also have a combined external debt of US$307 million, which is the least among all the regions.

Among the five States that make up the South-East region, Imo State tops with N150.1 billion domestic debt while its external debt stands at US$96.11 million.

Imo state is followed by Abia as the most burdened domestic indebted State with N89.13 billion and US$96.7 million external debt.

Anambra State has a domestic debt of N59.9 billion to pay and US$108.8 million external debt.

States in the North-West and North-East region will have to figure out how to clear N536.6 billion and N461.8 billion domestic debt respectively.

This headache is in addition to a US$504.9 million external debt for the North-East and US$836.1 million to be paid by North-West States currently battling with insecurity and a dearth of foreign investment.

The most burdened State on Domestic Debt in the North-West region is Kano State with N116.9 billion, while the lowest is Jigawa with N30.9 billion.

For foreign debt, Kaduna has the highest debt burden with US$567 million and Jigawa US$30.9 million.

Taraba State has the highest domestic debt in the North-East region with N106 billion, while Yobe N54.8 billion debt is the lowest.

2023: No decision yet on Gov Mohammed panel’s recommendations – PDP