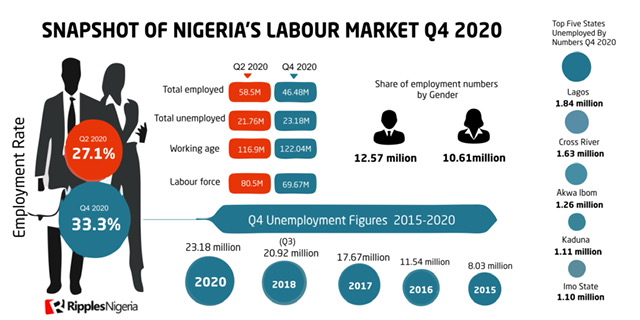 Unemployment rate rose to 33.3 percent in the fourth quarter of 2020, a 6.2% point increase compared to 27.1% recorded as at second quarter 2020 the National Bureau of Statistics (NBS) said in its labour statistics report released Monday, March 15.

According to the statistics bureau, 23.2 million Nigerians are currently unemployed, increasing from the 21.76 million in Q2 2020.

This indicates that in the space of six months, 1.48 million Nigerians lost their jobs.

Sequel to this, Ripples Nigeria presents to you six charts that capture the reality of unemployment rate in Africa’s most populous nation.

The report again showed that being educated in Nigeria is not enough to have a Job.

Breakdown of the unemployed data shows that Nigeria has a labour population of 6.5 million with tertiary certificates from Bsc/Hnd to a doctorate degree, out of which 2.54 million are unemployed.

As seen in the table, 97,196 unemployed  citizens hold at least a Masters degree, and 12,483 with a doctorate degree(PhD) to their names.

Those with Senior Secondary School Certificate remain the largest, with 8.17 currently unemployed.

Further analysis from the report showed that under the age-groupings, the highest rate of unemployment was recorded among the 15-24 year age-group. According to the report at least 53.4 percent or 5.25 million youths are currently unemployed.

The rate was followed by those aged 25-34 with 7.46 million representing 37.2 percent. Together, 12.72 million youths are currently unemployed in the country.

Although, the employed are 20.6 percent less than the people in employment in Q2, 2020.

The report also showed that the estimated number of persons in the economically active or working-age population (15 – 64 years of age) during the reference period of the survey, Q4, 2020 was 122,049,400.

Also, 11.03 million individuals work between 1 and 19 hours (unemployed) while 12.16 million were without work in the period under review.

The report further revealed that a total of 30.57 million individuals were fully employed as at Q4 2020 meaning they were working for 40 hours and above while 15.9 million of Nigeria’s population work between 20 and 39 hours.

Once again we have more women unemployed than men in Nigeria. The latest figure shows that the difference is about 1.96 million.

Ripples Nigeria observed that in Q4 2020, despite an increase in the working population, the labour force number dropped by 49.38 million from the number in Q2 2020, representing the biggest disappearance of labour force from a previous quarter.

The sit at home

Unemployed by our definition in Nigeria means that a person in a week worked for less than 20 hours a week, however there are about 12.16 million Nigerians who all through the week had no meaningful engagement.

And these numbers of redundant who are within working age have increased from 1.57 million in third quarter of 2014 to 12.16 million in 2020 fourth quarter.