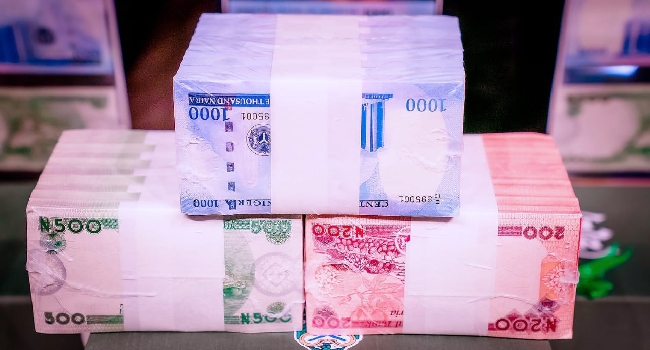 The redesigned naira was received with mix reactions. Many expressed their disappointment via Twitter, as they did not see the expected major changes in the new outlook, while some said the new naira is more about improving its security and not appearance.

But looking away from the mixed reactions – since the CBN can’t afford to go back to the drawing board due to the criticism – the most important debate now is, how does the new naira affect Nigerians and the economy?

Why the naira was redesigned?

There are two major reasons the Central Bank of Nigeria (CBN) redesigned the naira notes; to recover money outside the financial system and improve the naira’s security.

Recovery of naira: The governor of the central bank, Godwin Emefiele, had complained about the volume of naira notes outside the commercial banks.

Emefiele said there was N2.7 trillion notes that the banks can’t account for, out of N3.3 trillion notes in circulation. The CBN said only N600 billion was in banks’ vaults. So the new naira would force Nigerians into depositing the old currency to the banks.

Security measure: There were claims that the old naira notes were easy to replicate. And according to President Buhari, the new naira notes have been fortified with security features that make them difficult to counterfeit.

Cost of printing, is it really worth it

According to financial analyst, Kalu Aja, the cost of redesigning the naira was N280 billion. This means each Nigerian contributed about N1,296 to the creation of the new naira, based on the population of 216 million.

Based on what was unveiled last Wednesday, it almost seemed like water in s basket, but since the reason for the change was to recover hoarded naira notes and reduce replication of the notes for fraudulent activities, the funds invested cannot be ruled as a waste.

Already, the CBN had revealed that over N165 billion had been received since the request that people deposit their money in October due to the new naira. So, this is a sign of it being worth it.

How will the new naira affect Nigerians and the economy?

1) Rise of dollar, fall of naira: Although, for every positive outcome, there’s a negative, and one is that too many naira, especially the stashed ones, will now chase few dollars, as CBN has shown it is serious with its new naira plan.

READ ALSO:Naira constant, exchanges at 445.30 to a dollar

This will likely cause value of naira to fall in the exchange market in the coming days, most especially the black market, where persons with illegal businesses will look to dump hoarded naira in exchange for dollar. They will be willing to pay more just to avoid losing the currency.

So while CBN is achieving its plan of forcing people to take the naira in circulation to the banks, Nigerians and others conducting legal businesses will be paying premium rate in the parallel market to obtain USD, as naira dump will raise dollar rate.

2) Fuel Inflation: The new naira will further drive inflation forward in the short term, causing cost of living to skyrocket, thereby, increasing Nigeria’s poverty population which is 133 million according to the National Bureau of Statistics (NBS).

This monetary policy will negate CBN’s effort to curb inflation due to the impact of the new naira on dollar rate. Prior to this administration’s tenure, inflation was nine per cent, but it is up 21.09 per cent as of October 2022.

Inflation will soar into 2023 on the back of weak naira, as one of the major drivers of Nigeria’s inflation is dollar rate, which often determines prices of goods traded in Nigeria.

Also, cost of importation will rise, considering FX scarcity is forcing traders to shuttle between the black or official market regardless of the incentives provided by CBN’s dollar for naira programme.

3) Hoarding of dollars/Rationalising: Scarcity of FX will rise in the forex exchange market, as persons hoarding naira notes will be motivated to exchange it for dollars and continue hoarding in foreign currency.

Also, this will birth scarcity that causes demand to overshoot supply, as such, CBN and other banks will have to continue rationalising, which means another episode of protest among foreign airlines could happen.

Ripples Nigeria had reported that scarcity had forced many banks to review their international spends for Nigerians, with most now hovering around $20 and $50 per month, from what used to be around $1,000.

4) Drop in company turnover, job loss, GDP contribution: Companies with dollar debt will have to draw more naira from their earnings to buy the USD at a higher rate than when it was borrowed.

This will affect earnings that is already struggling with declining consumer purchasing power and inflation. As a result, to save cost, jobs might be cut in the country, increasing unemployment.

In broader view, industries’ contribution to GDP could fall. Already, Nigeria’s GDP growth rate slowed by 2.25 per cent year-on-year in the third quarter of 2022.

5) Inflation on downward path: While the introduction of the new naira will raise inflation further in the short term, it will curb inflation in the long term, as mopping the money in circulation will reduce availability of cash for purchase.

This will force companies into dropping prices of goods and services to push sales. As a result, inflation will hit reverse on the back of falling prices, and reduce cost of living in the long term.