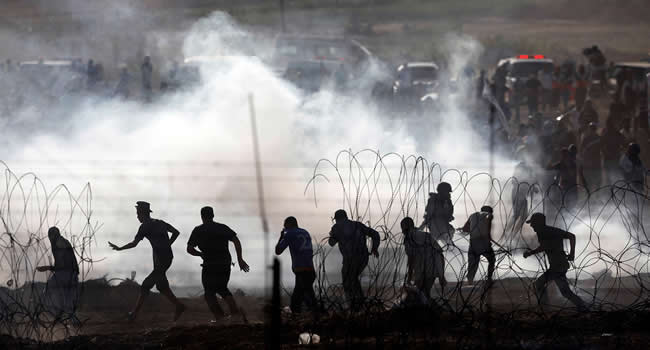 The Israeli-Palestinian conflict will never be settled through violence. Both sides must wake up and decide whether to chart a new path leading to a mutually gratifying peace or continue a self-consuming conflict that leaves nothing but equally shattered people living in constant horror and fear

The ongoing, bloody Israeli-Palestinian conflagration offers yet another bitter reminder that there is no escape from a tragic reality that both have created and shaped. This is a reality bursting with hatred, vindictiveness, and venom, as both sides failed to reconcile seventy-three years of enmity despite the inevitability of coexistence. They must choose between peace, security, and progress, or cling to their illusion that they can rid themselves of the other, only to find out the weight of the price and the untold suffering and pain they will endure. It is time to finally face the truth, as the current gory hostilities will offer just another prelude for more to come. Thousands upon thousands of Israelis and Palestinians will die meaningless deaths for no reason but their leaders’ moral decadence and illusions.

An immediate ceasefire must now be brokered, not only for the sake of sparing more destruction and death, but for creating an atmosphere for the resumption of peace talks, to which both sides must commit—and commit now—to seek a peace agreement based on a two-state solution. Otherwise, the current conflagration will only broaden the vicious cycle of wanton violence, further contaminating the festering wounds from which generations have suffered. Both sides failed to right their wrongs, clinging to falsehoods and an alternate reality while their people ending up paying the price.

Israeli leaders on the right have successfully portrayed the Palestinians as irredeemable foes to be suspected, castigated, and contained, as they presumably pose an existential danger. They brainwash the Israeli Jews to believe that only right-of-center policies offer everlasting security, prosperity, and growth and would quell any Palestinian resistance or threats of terror. Instead of seeking an end to the current hostilities and restoring calm, nearly every single leader of the plethora of political parties advocated more forceful counter-attacks to inflict as much damage and loss of human life among the Palestinians. They want to demonstrate their bravado, lest they be accused of being soft on terror, if not traitors, but they are cowards for caving in rather than mustering the courage and daring to speak the truth.

For the past decade, not a single Israeli party, especially Netanyahu and his Likud, has brought the Israeli-Palestinian conflict to the fore in earnest, pretending as if there is no Palestinian problem. The occupation became a normal state of being, and Israelis resigned themselves to a state of no war and no peace as the best suitable solution to prevent the Palestinians from establishing a state of their own.

Suppressing the Palestinians and making their lives miserable was the unspoken motto behind a malicious campaign to force as many Palestinians to leave in order to quench their voracious lust to seize Palestinian land. Forced evictions, night raids, unlawful incarceration, uprooting trees, and house demolitions became routine–commonplace–while they exploited Palestinian resistance to justify their bigoted policy, oblivious that they must coexist with the very people they loathe, despise, reject, and denounce.

Palestinian leaders, moderate or extremist, do not fare any better. They betrayed their people, misleading them to believe that the day of liberation was near. They promised the right of return, knowing it will never be realized, using the refugees as hostages to serve their interest and hunger for power. Plagued with division, fierce rivalry and corruption became the hallmark of the Palestinian leadership. Instead of building a nation in which they can take pride, they squander every opportunity to make peace and end their peoples’ ever-debilitating plight.

They poison their public with cruel falsities, linking their salvation to Israel’s destruction. Seventy-three years later, the refugees continue to languish in despicable camps while Israel became a global power. To this day, Hamas, Islamic Jihad, and their like continue to preach the gospel of Israel’s imminent destruction, when their own ruin is hanging on Israel’s whims.

I challenge every Israeli and Palestinian to show me, is there a way out of coexistence? The interdispersement of Israeli and Palestinian populations in the West Bank, Jerusalem, and Israel proper is not a choice, but an unshakable fact. They must either cooperate and collaborate, and live-in harmony, security, and peace, or continue to kill each other, leaving no winners but losers. Hopelessness, despair, and the next bloody conflagration will await them around the corner.

It’s time for the United States to warn both sides that this endemic conflict must come to an end. President Biden must seize the unfolding tragedy and seek a breakthrough where his predecessors have failed. It must begin with a reconciliation process for a determined period of time with the objective of reaching a lasting peace. The Saudis must be enlisted to entice Israel with normalization, and encourage it to end the occupation. At the same time, the Saudis must persuade the Palestinians that their aspiration for a state depends on their forsaking the use of force.

The solution is there for all to see, provided that both sides negotiate in good faith. US and Saudi mediation will be essential until both sides reach an equitable solution. It is a call that Biden must make, forcing the Israelis and Palestinians to wake up to the only reality and not deprive another generation of living in peace that has tragically eluded three generations before.

Dr. Alon Ben-Meir is a professor of international relations at the Center for Global Affairs at NYU. He teaches courses on international negotiation and Middle Eastern studies.

Nigeria; a nation in dire need of patriots

BOB MARLEY: Memories of a memorial