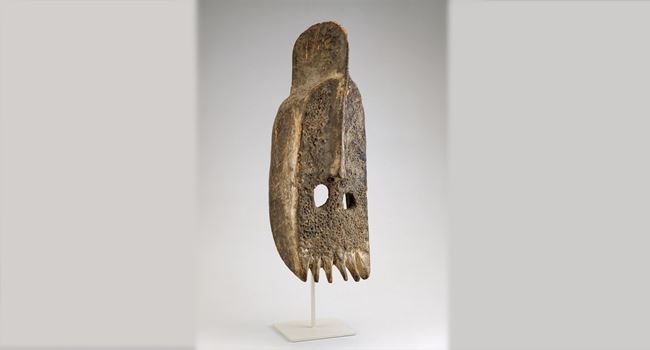 A 200-years-old traditional mask stolen from the Sha village in Bokkos local government area of Plateau State, has been discovered in the Art Institute of Chicago, USA, one of the world’s major museums, housing an extraordinary collection of objects from across places, cultures, and time.

According to investigations conducted by a private citizen in the state, Mark Shadung, and the released on Tuesday, November 24, the 64.8cm ancient traditional mask was found in Gallery 137 in the Museum’s “Arts of Africa.”

The report stated that the mask which was once covered with potent red abrus seeds that were held in place by a resin paste before it was stolen, had been redefined and made to look “a bit modern.”

A listing on the Institute’s website says that the mask was “probably used in initiation rituals for one of six age-grade associations.”

Describing the origin of the mask, Shadung said:

“Among the Sha people, the mask represents a male spirit called Akirang, who had a female counterpart named Aja, a spirit associated with human and agricultural fertility.

“The mask, believed to have been designed between 1867 and 1900, confirms the existence of civilization in present day Central Nigeria, long before the arrival of Western education.

“A monument of similar age, a pedestrian bridge believe to have been built since the 1800s, exists in Butura Wur, a Ron native Community located 40 miles South of Jos, the capital of Plateau State.

“The Chicago Arts Institute is perhaps one of few foreign banks of art preserving such records, with researchers and tourists from Nigeria likely visiting.”