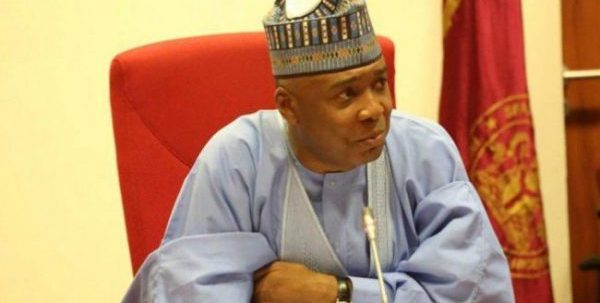 President of the Senate, Bukola Saraki, Monday claimed that the Nigerian National Petroleum Corporation (NNPC) had continued to engaged in corrupt practices despite frantic efforts to reform the national oil company.

Saraki stated this at the commencement of an investigative hearing by the Senate committee on Petroleum Resources (Downstream) on alleged misappropriation of N10 trillion by the NNPC between 2006 and 2015. The said money was spent on payment of fuel subsidy.

Saraki was represented at the event by the Senate leader, Ahmad Lawan. He expressed displeasure about what he described as secret and opaque re-introduction of subsidy in the prices of Premium Motor Spirit (PMS), popularly known as petrol, without an approval of a budget by the National Assembly.

According to the Senate President, “findings have brought to light the fact that our downstream oil and gas industry needs critical reforms.”

He further stated that it has be exposed in “spite of the stoppage of the fuel subsidy regime, and the non-appropriation of funds for the scheme due to the fraud and mal-administration going on in the scheme, that fuel subsidy payments continue to be paid from our commonwealth illegally and without appropriation by the National Assembly to a few quietly in order to dodge scrutiny and avoid exposure.”

Insisting that the Senate would not rest until all perpetrators of the fraud, especially those in high public offices were exposed, the Senate President affirmed, “But this 8th Senate is here to expose every corruption in the system irrespective of how highly placed those involved are. This unconstitutional and illegal practice must be addressed and we are not going to rest until it is fully addressed.”

Saraki charged the committee to “get to the bottom of this issue and proffer long lasting solutions to this racketeering in the fuel market that leaves the Nigerian people poorer every year.”

Other questions the committee must seek answers to, according to Saraki, are “the actual quantity of fuel the Nigerian market consumes; the underlining reasons why the market is struggling to operate without government intervention; and the process and all those involved in signing out unbudgeted funds outside the budget passed by the National Assembly.”

In the meantime, the NNPC has claimed that the Federal Government was indebted to it to the tune of N170.6 billion which is outstanding subsidy payments, due from January 2006 to December, 2015.

Leading a team of top management of the NNPC to the investigative hearing, the Group Managing Director of the Corporation, Dr. Maikanti Baru, said the figure was arrived at after deduction of N4.950.80 trillion received as payments from theN5.121.40 trillion approved subsidy claims of the corporation from January 2006 to December 2015.

Providing details of the accruals, Chief Financial Officer of the corporation, Mr. Isiaka Abdulrazaq, traced the origin of the subsidy regime to October, 2003 when NNPC was directed by the Federal Government to commence the purchase of domestic crude oil at international market price without a corresponding liberalisation of the regulated price of petroleum products.

He explained that under the subsidy regime, NNPC and other suppliers of refined petroleum products were entitled to file subsidy claims to the Petroleum Products Pricing Regulatory Agency (PPPRA).

Mr. Abdulrasaq however noted that unlike other oil marketers, NNPC did not receive cash payment for subsidy claims as its claims were deducted out of cost payment to the Federation Account after due certification by PPPRA.

‘’In summary, NNPC submits that the amount of over N5.1 Trillion was duly approved by PPPRA as subsidy claims for NNPC. Out of this sum NNPC is still being owed N170.6 Billion,’’ the NNPC official said.

The corporation called on the Senate Downstream committee to assist in ensuring that the outstanding debt was settled to enable NNPC effectively achieve its obligation as the supplier of last resort to the downstream sector.