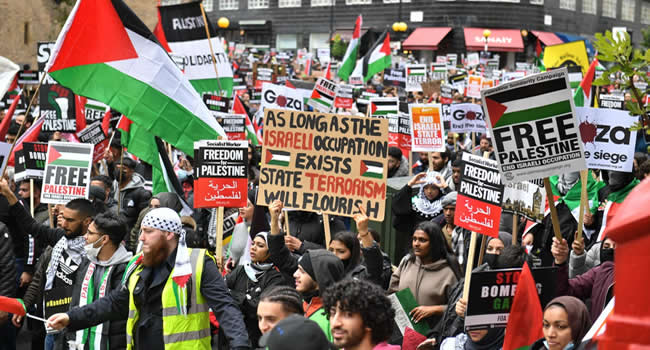 Thousands of people who are in solidarity with the oppressed Palestinians in the ongoing conflict with Israeli gathered in central London on Saturday to protest the Israeli forces onslaught on the hapless Middle East nation.

By midday on Saturday, demonstrators had arrived at Hyde Park near Marble Arch to march to the Israeli embassy, holding banners and chanting solidarity songs.

They marched through the park chanting “free, free Palestine” and holding banners calling for an end to the bombing of the territory by Israeli forces.

Huge crowds of protesters then gathered outside the gates of the Israeli embassy in Kensington.

In order to forestall any potential breakdown in law and order, dozens of police officers lined nearby streets.

In a statement, the British Police said: “Officers are engaging with a group of people who have gathered for a demonstration in Central London this afternoon.

“A policing plan is in place to ensure everybody is kept safe and to reduce the spread of COVID-19.”

The Palestinian Ambassador to the United Kingdom, Husam Zumlot, welcomed the development saying: “This time is different. This time we will not be denied anymore. We are united. We have had enough of oppression.

“Today we are saying enough, enough with the complicity. Thank you for standing with us.”

Thousands of Palestinians have been forced to flee from their homes after a week of sustained conflict.

Palestinian militant group Hamas has fired hundreds of rockets into Israel, whose military responded by barraging the Gaza Strip with tank fire and airstrikes since Monday night.

At least 126 people have been killed in Gaza, including 31 children and 20 women.

In Israel, seven people have been killed, including a six-year-old boy and a soldier.