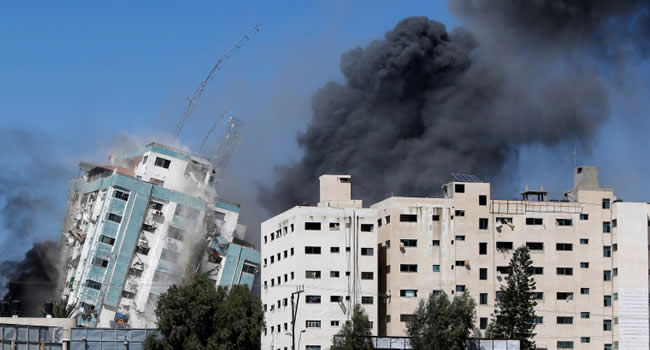 The war between Israel and Palestine took another twist on Saturday as Israeli warplanes destroyed a Gaza City building housing offices of The Associated Press, Al-Jazeera, and other residential apartments.

The bombing, which followed the renewed violence between Israeli and Palestinian forces completely collapsed the 12-storey building.

In a Twitter thread by the IDF today, the Israeli military claimed Hamas uses tall buildings for “military purposes” without specifically referencing the building housing the AP and Al-Jazeera.

Al Jazeera in a statement condemned the bombing and destruction of its offices by the Israeli military in Gaza.

The media organization said the bombing was a clear act to stop journalists from conducting their duty of informing the world and report events on the ground.

The Acting Director-General of Al Jazeera Media Network, Dr. Mostefa Souag, who spoke on the bombing of the al-Jalaa building, said: “We call on the international community to condemn such barbaric actions and targeting of journalists and we demand an immediate international action to hold Israel accountable for its deliberate targeting of journalists and the media institutions.

“The aim of this heinous crime is to silence the media and to hide the untold carnage and suffering of the people of Gaza.

“The destruction of Al Jazeera offices and that of other media organizations in al-Jalaa tower in Gaza is a blatant violation of human rights and is internationally considered a war crime.

“We call on all media and human rights institutions in denouncing this heinous crime, and to stand with Al Jazeera and other media organisations targeted by the Israeli army despite knowing their use of the building as their headquarters for many years.”

DRC sentences 30 people to death over clash with police