Home » Business » Transcorp Hotels gets BPE’s discharge certificate; this is what it means 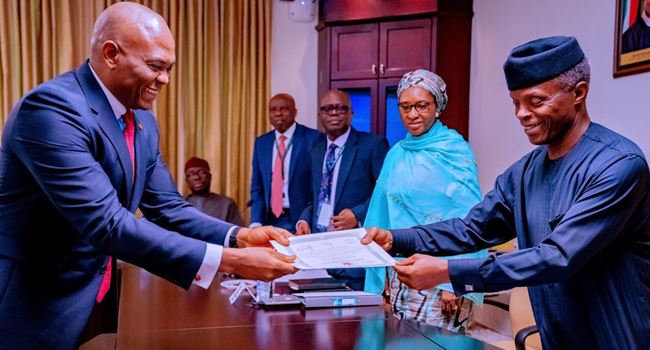 Transcorp Hotels Plc, a subsidiary of Transnational Corporation of Nigeria Plc (Transcorp Plc), on Monday, received a Certificate of Discharge, indicating the hospitality company has fulfilled all privatisation conditions attached to the sales of Transcorp Hilton Hotel, and will no longer be subject to any post-privatisation monitoring.

The Director-General of the Bureau of Public Enterprises (BPE), Alex Okoh, stated that Transcorp excelled at achieving the KPIs established during the monitoring and evaluation of the asset.

Commenting on the development, Elumelu said, “I support public-private partnership as a viable option for catalysing our economic development.

“For public-private partnerships to work and become a viable approach for the transformation of our country privatised entities and their owners must justify the government’s confidence in them by visibly improving the acquired assets, create jobs, and increase government revenues.

“Such positive outcomes will encourage the government to privatise more national assets and free itself of revenue for critical social and infrastructure sectors such as education, healthcare, roads, transportation, etc”.

Owen Omogiafo, the hospitality company’s Chief Executive Officer (CEO), also said “This is a significant milestone in the history of our company and a further demonstration of our long-term commitment to improving lives and transforming our nation”.

Transcorp had emerged the core investor in the privatisation of hotel asset in 2005, which gave birth to Transcorp Hotels Plc in 2014 following a decision to make the hotel asset available to the investing public as shareholders.

The company later extended its reach to Calabar, operating as Transcorp Hotels Calabar and further acquired strategic properties in Lagos and Port Harcourt where it intends to develop new hotels.

In 2018, Transcorp Hotels completed a $100 million upgrade of the Transcorp Hilton Abuja, which was a key factor that led to the final discharge of the company by the BPE from further post-privatisation obligations.