Home » Graffiti » What next after N-power Scheme? 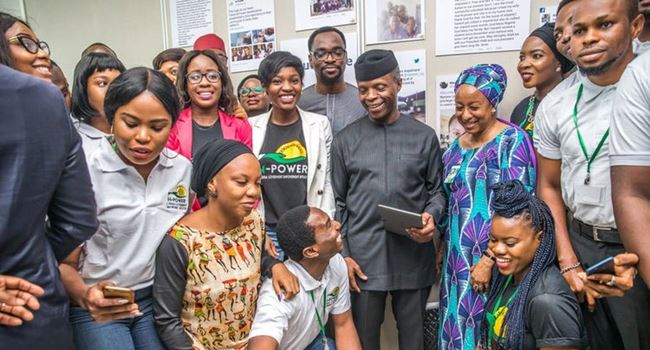 The National Social Investment Programmes (NSIPs) created by the Federal Government in 2016 for poverty reduction is gradually becoming poverty creation platform as the beneficiaries continue to experience delay in the payment of their stipends, rising in prices of goods and services in the market due to inflation, undefined exist package plan for the N-power beneficiaries among others.

On 24th February, 2020, a league of the N-power beneficiaries who claimed to be representing the interest of all the N-power beneficiaries in Ogun State embarked on a two days peaceful protect demanding the government response on what becomes their fate after the N-power scheme. The reason is because those that have been working since the inception of the programme in 2016 are still in the system working as volunteers till date meanwhile the service year ought to be two years.

Although, the reason for the extension of service according to the N-power officials, is to be able to finalize the exit plan for the volunteers so that they will not return to the street as unemployed graduates, which is a good plan. But, since the announcement of the exist plan in 2019 till date there have not been any visible step taken by the government to match this promise.

Rather, what seems to be the monthly experience is the delay in the payment of the beneficiaries stipends and complain of lack of transparency created by the bad elements among those that were handling the programme before being transferred to the Ministry of Humanitarian Affairs, Disaster Management and Social Development on 1st October, 2019.

The spokesperson for the Ministry, Rhoda Ishaku Iliya, said on 23rd February, that the present processes, especially beneficiary enrolment and payments including for consultancies, are being scrutinised and stakeholders are being consulted for inputs that will lead to the total overhaul of the programmes in order to achieve the purposes for which they were established.

Truely, the overhauling of the system is long overdue looking at the level of corruption in the system. This corruption has eaten deep into the fabric of the core goal of the scheme which according to vice president of Nigeria, professor Yemi Osinbajo while lunching it in 2016 is to change the lives of the less previleged ones in the country.

This lack of transparency has denied the majority of the beneficiaries of the N-power scheme the tablet device they ought to have been given immediately they were adopted into the system which the officials in charge of the programme claimed to have distributed to them in the media.

The same narrative is obtainable in the school feeding programme where the government continue to pay through the NSIPs for the food that never prepared for the majority of pupils in schools across the country. The same thing is happening at the level of trader monies where some traders are being denied access to the #10000 even after being eminently qualified.

Assumptively, it is the same lack of transparency that is responsible for the delay in the implementation of the exist plan the government claimed to have for the N-power beneficiaries. If not, by now the two hundred thousand graduates that started the programme in 2016 ought to have been given letter of permanent employment while the batch ‘B’ graduates of the scheme ought to have completed all the necessary clearance, warming up to pick up their letter of permanent employment.

Infact, the government ought to have made the platform an employment pool where graduates from different fields are drawn to fill vacant positions in the Ministries and other areas including private sectors where vacancies exist.

President Buhari in 2015 promised to create a million job yearly, and in 2019 promised to uplift 100 million Nigerians out of poverty in ten years. But less than a million graduates in N-power are doing volunteer jobs under the watch of the government since 2016 collecting 30, 000 Naira monthly.

In an ideal situation, the government ought to have started the upliftment with these five hundred thousand graduates since they have acquired the relevant experiences in the areas they have been doing volunteer job. Unfortunately, the reality on ground seems to be different from the promises made by the president during campaigns. This is complicated by the lack of clear statement on the next level package for the volunteers.

Though, the honourable Minister, Hajiya Sadiya Umar Farouq recently reiterated the commitment of the government to the exist package plan but failed to disclose the details and the time it is likely to come whereas the State and Federal governments continue to employ people to fill the same positions the N-power beneficiaries are serving as volunteer.

Therefore, it is high time the government transform the N-power beneficiaries from volunteers to permanent staff with a commensurate payment with their qualifications instead of filling the vacant positions with new people who have the same qualifications with the N-power volunteers that have been living on a stipend less than the half of the salary of a cleaner in the developed and some developing countries Nigeria claimed to belong since 2016.