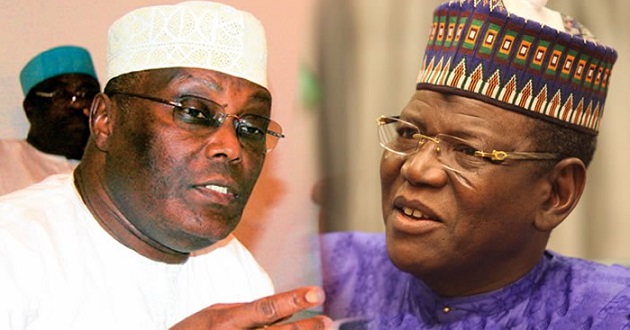 Former vice president Atiku Abubakar said on Monday that he was confident his fellow presidential aspirant on the platform of the Peoples Democratic Party (PDP), Sule Lamido, will step down for him.

Abubakar stated this at the PDP headquarters in Dutse, Jigawa State, when he met party leaders as part of his campaign tour.

He said he believes Lamido will surrender his bid for him because the former governor is his younger brother and shares the same political ideology with him.

Abubakar referenced a case in the Third Republic when the Yar’Adua brothers initially sought the tickets of the defunct Social Democratic Party.

Atiku recalled that the late Umar was eventually persuaded to sacrifice his ambition so as not to scuttle the chances of his elder brother.

“But with the intervention of elders in the state, the junior brother Umar Musa stepped down for another aspirant so that the politics will not be a family affair, leaving Shehu Musa to contest for president while someone from another family vied for governor,” Abubakar said.

“Sule Lamido is my junior brother and will learn from what transpired between Shehu Musa and Umaru Musa”, he added.

Abubakar also told the gathering that his mother was from Jigawar Sarki, a village in Dutse Local Government Area of Jigawa State, but her family migrated to Adamawa State where he was born.

Speaking, the state PDP chairman, Salisu Mahmuda, called on the aspirants to be united to prevent what he called the reelection of the All Progressives Congress (APC) administration in the country.