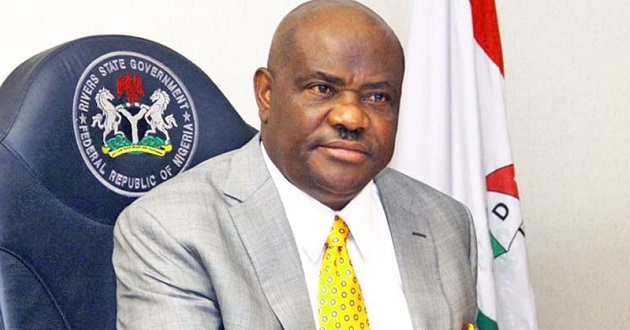 The Governor of Rivers State, Nyesom Wike has again declared that the state is a Christian state, and that God has delivered it from the mechanisation of deadly political forces who planned to destroy it.

The governor made the declaration at the Commissioning and Dedication Service of the 14,000 seater capacity church building of Mountain of Fire and Miracles Ministries, South-South 1 Region at Rumuola, Port Harcourt on Friday.

According to him, the evil forces unleashed war on Rivers State during the 2019 general elections, but God conquered them.

He said: “God fought our battles and conquered our enemies. I saw war, but God fought the war for the people of Rivers State.

“I have handed over the state to God and men of God like Dr Daniel Olukoye deserve our respect and prayers.”

He further noted that when it mattered most, Christians rose up and prayed for Rivers State adding that God answered the prayers of Christians, checking the political detractors in the process.

“God has shown that He is God. God has used men of God like Dr Olukoya to pray for Rivers State. God will never depart from Rivers State, ” he said.

Declaring Rivers as a Christian state, Wike said that hundreds of planted editorials in national newspapers will not shake the resolve that Rivers is a Christian State.

“Let’s continue to praise God for all his benefits.”

The governor also called on the church to fully participate in the politics of the country to determine its direction, adding that Christians cannot continue to look the other way whilst others hijack the political terrain and impose bad governance on the country.

“You must stand up and decide the direction of the country. Register to vote and come out to vote. You must ensure that your votes are counted.

“The Christian church must be part of the process to transform the country. The church in her numbers, must participate in the democratic process”, the governor said.

A controversy had brewed sometime ago, when the governor made such a declaration, with many muslim groups expressing reservations over his statement on the matter.

Nigerian govt sets 2023 as stop date for importation of petrol, a shift from earlier date of 2019