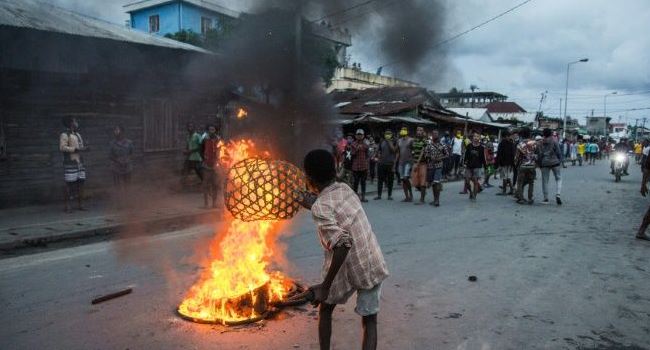 Tension erupted in Madagascar on Wednesday between the police and anti-lockdown protesters after what began as a peaceful protest escalated due to alleged police violence.

Protesters who had taken to the streets in the eastern town of Toamasina were outraged after a police officer allegedly beat a street vendor accused of breaching an afternoon ban on commercial activities.

Security operatives were also accused of firing rubber bullets at protesters who were mounting road blocks, throwing stones and burning tyres in the streets.

“The mobs are still continuing and security forces are restoring order,” the police said in a statement on Wednesday night adding that there was no form of violence recorded and that the street vendor had returned home after a brief hospital visit.

Groups have taken to social media to query President Andry Rajoelina’s decision to send troops to enforce the lockdown demanding he stepped down within 12 hours.

Rajoelina had imposed a lockdown on Madagascar’s three main cities at the end of March in an attempt to contain the spread of infection as the country’s tally reports over 900 infections and 6 deaths in Toamasina alone.

Other two states, Antananarivo and Fianarantsoa have since seen gradual lifting of lockdown restrictions while Taomasina would remain under confinement.