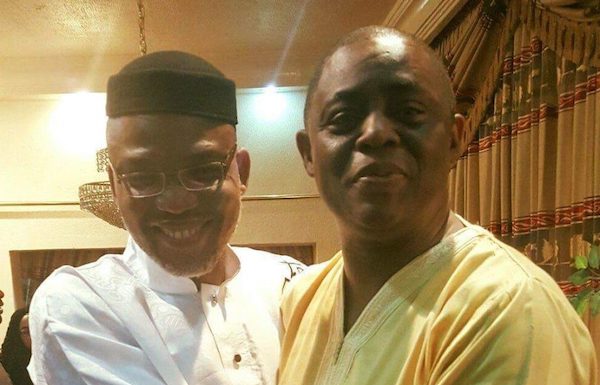 Per Prof. Patrick Lumumba, people who are politically and intellectually bankrupt normally seek refuge in ethnicity and religion as their major fact of mobilization. The recent ethnoreligious politics over an image that represents the Fulani tribe on the new Nigerian Passport championed by “Apostle” Suleman, Nnamdi Kanu and Femi Fani-Kayode was sinister. It points to a new dangerous retreat to tribalism by doomsayers who are politically and intellectually bankrupt.

If you joined these doomsters in propagating that misleading and mischievous narrative that the inscription of your tribe’s ethnic identity together with that of the Fulani on our passport, is a confirmation that “Fulanization” has commenced, then, count yourself among the politically and intellectually bankrupt. It is you all that have made tribalism the central dividing line in our politics.

In practice, Nigerians of different ethnicities and religion live relatively peaceably. The question, thus, is; how do we explain the increasing polarization in attitudes? Why do so many ethnic groups regard others as threats? Why will Nnamdi Kanu and FFK feel happy when they saw their red-caps on our passport but felt threatened by cows that represent the Fulani ethnic group?

In today’s Nigeria, any group of three or more talking politics can’t make it past the first minute before the animosity and cynicism boils over and derails the conversation. A casual glance at the comment section of any Nigerian online publication and social media platforms like Facebook, Twitter will reveal that the only consistent trait we still share is anger. From disagreement to disdain to the dehumanization of people with different views, the increasing level of animosity and hatred is pushing Nigeria to dangerous new tribalism.

There are thousands of glaring failures and incompetence that anyone that wants to attack Buhari can latch on without resorting to the dangerous politics of tribalism in demonizing the Fulani. It is unfortunate, very unfortunate that Nigerian politics is increasingly no longer about argument or discussion of substantive issues; but about trivialities and trying to put Nigerians with different political ideologies into the dark box of ethnicity and religion.

Contrary to what Kanu, Suleman that calls himself an apostle and FFK will want you to believe, the real threat to social cohesion is not enmity between the Igbo and the Yoruba or the Igbo and the Fulani, but a regressive politics of identity that they are propagating. The problem with Nigeria is the emergence of a tribalized society in which people have an increasingly narrow sense of belonging. At the fringes, this can, for example, funnel disaffection into a sense of entitlement over grazing land on one hand, and into anti-Muslim-anti-Hausa hatred on the other.

Here is how they manipulate Nigerians: by sowing seeds of disaffection in reframing mainstream politics as a war between “northern” and “southern” Nigerians and Muslims and non-Muslims alike, these merchants of dangerous tribalism propagate politics of identity. The result is that millions of Nigerians now see their problems through the narrow lenses of tribe, culture, and faith.

Nigerians see values less as ideals than in terms of identity. For many non-Fulani, the nomadic culture of cattle rearing conjures images of oppression of farmers and Islamization agenda of the APC administration and Buhari. For many Fulani on the other hand, open grazing that leads to the destruction of crops in farms means no more than an affirmation of cultural tradition.

In Nigeria, urged by these merchants of dangerous tribalism, we have regressed to a primitive moral ethos. For years, we have been telling our tribes, for example, that the Igbo are terrible or that the Yoruba cannot be trusted or that the Hausa-Fulani are still marching towards the Atlantic to fully Islamize Nigeria. The result is that we now have two generations of Nigerians whose ancient tribal circuits are turned on and ready for battle.

It is not thus surprising that many Nigerians are thrilled with a sense of meaning and purpose as the merchants of dangerous tribalism push for Armageddon. Although we are not divided into warring camps, the consequences of tribalism have been devastating. The tribal common-enemy thinking is tearing us apart. It is fueling the heightened insecurity and derailing governance.

Suleman, Kanu, FFK and Nigerians attempting, by all means possible, to push Nigeria down this dangerous slope are merchants of ethnic nationalism. They see things that don’t exist and fail to recognize things that do. For example, how could “apostle” Suleman who happily collects Nigerian currency with the inscription of cows at his church use the same inscription to divide Nigerian?

If you encounter an ethnophobia with a mindset that is half empty, it makes your job of reorienting their mindset easier. The trouble is that many Nigerians like Suleman, Kanu and FFK have a full-closed mindset – saturated with garbage, hate, and hypocrisy. After cracking open and peeking into their mind, you realize that the purpose of education, which is to replace a closed mind with an open one, is made more taxing. First, to empty the garbage in the mind of a will be student.

The mindset of “Apostle” Suleman, Nnamdi Kanu, FFK and millions of Nigerians that have caught the bug of dangerous tribalism must be emptied if we are to avoid entering this unchartered and dangerous territory. Every ethnicity and religion should stop fighting to write their own gospel that defines their own virtue. The oppressor and the oppressed should stop telling a story and building their own innocence on their status as victims. Because, as we all know, just about everybody can find a personal victim story.

For a political revolution to happen in Nigeria, we MUST do away with stereotyping and dangerous tribalism. We must STOP us versus them thinking. We MUST say no to the seductive whisper of seeking national disintegration from these merchants of doom. Throwing fuel on fire we, surely, consume us ALL. Only as a united Nigeria can we find a way forward, together.