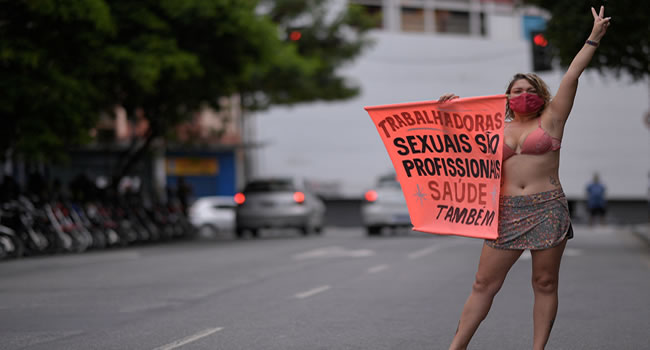 Prostitutes in the Brazilian city of Belo Horizonte have embarked on a week-long strike to press home their demand for inclusion in the group of front-line workers receiving priority COVID-19 vaccines.

The strike action which began on Monday almost turned violent on Wednesday when police tried to disperse the protesting sex workers who took to the streets and carried placards with various inscriptions such as: “Health ministry please include us sex workers as a priority vaccine group,” “Sex workers are a priority group,” and “Sex workers are health professionals too.”

President of the Association of Prostitutes of Minas Gerais state, Cida Vieira, who is one of the organisers of the protest, said the pandemic had forced the city council to close hotels in the southeastern city of Belo Horizonte, thereby forcing thousands of prostitutes to solicit for clients on the street.

She said: “We are a priority group, we are health educators, peer educators. We form part of that group since we give information about STIs for men and distribute condoms.

“We are in the front line, moving the economy and we are at risk. We need to get vaccinated.”

Another sex worker, Lucimara Costa, added: “We are part of the priority group because we deal with various types of people and our lives are at risk.”

The COVID-19 pandemic has killed 332,000 people in Brazil, a toll second only to the United States.