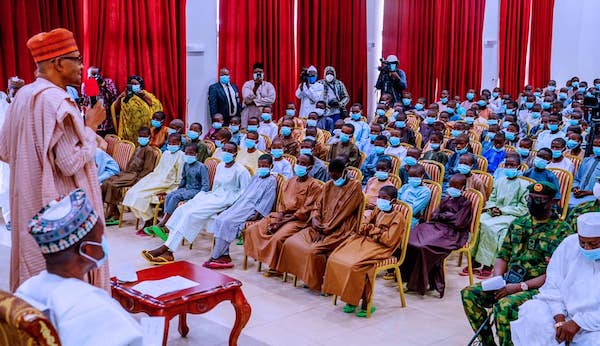 The president, who met the students at the Government House, Katsina, congratulated them on their safe return.

He reiterated his administration’s determination to provide security for all Nigerians.

Buhari stressed that the government would continue to improve the nation’s security system.

The students were released by the abductors on Thursday night.

They were transported back to Kankura from Tsafe, Zamfara State, on Friday morning.

The students were abducted from the college by armed bandits last Friday.

The Personal Assistant on New Media to the President, Bashir Ahmad, had earlier said on his Twitter handle that President Buhari would meet with the students whenever they return to Katsina.

Governor Aminu Masari, who confirmed the development to journalists on Thursday night, said the release of the students was facilitated by the leadership of the Miyetti Allah Cattle Breeders Association of Nigeria (MACBAN) and some other persons.

He, however, denied that the state government paid a ransom to the bandits to secure the release of the students.

Related Topics:BuhariKatsina students
Up Next