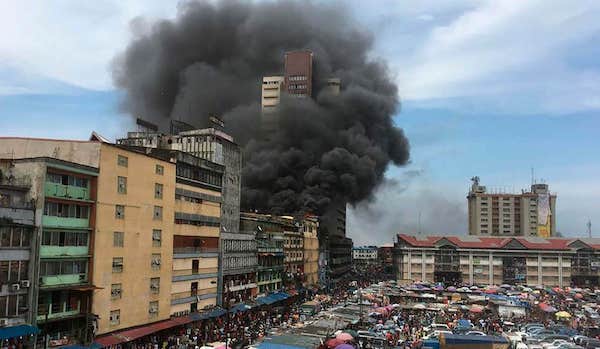 The awareness of recent fire outbreaks in major markets is enough to keep every businessman awake, dreading the consequences of an unexpected fire disaster that is capable of wiping out millions-of-naira worth of investment. This becomes more worrisome as it is evident that the firefighting system, as managed and operated, in various states in Nigeria cannot but only pass as a camouflage set of apparatus.

In only 4 months, lives (of people trading) and property have been lost to fire at 3 different locations, one in Onitsha and 2 within Lagos, West Africa’s 5th largest economy. In fact, since August, save for September, there has been a reported fire incident, leading to the wreckage of buildings, structures and outright investment loss –in partial or total.

The most recent of this report is the November 5 incident where a section of the Balogun market in Lagos was consumed by fire.

While no amount of concerns, solidarity and sympathy can replace the enormous investment lost during any fire outbreak that could not be managed, as in most cases in Nigeria, we would – as experts – highlight a possible succour that could be a life-safer in recovering huge capital and assets in the event of an ill-fated fire disaster.

Contrary to what is expected in business, Nigeria, like many African countries still largely merry among those who place little or no significance on the need to insure their businesses, insure their property or even sign up for life assurance contracts.

The unfortunate reality is such that an average Nigerian has no financial protection plan for the future, save what can sustain himself and his family in the interim. Aside revealing the level of ignorance of local business owners and some corporate investors, this accounts for the usual depression that follows a deficit or plunge in investment.

With every insurance contract, an entity or individual is financially protected. This way, there would be an agreed sum claimable from an insurance company upon loss of what had earlier been insured. For the Onitsha fire outbreak, for instance, where lives and millions of naira were lost, a proper insurance policy entered into before the incident could have lightened the tragedy.

The insurance template is based on the aggregation of funds from a pool of individuals, wanting to be insured, in order to provide payment to any of these people who eventually turned a casualty to whatever his insurance contract is signed against. This is simply accepting the risk of clients for a payable sum in the future should the unexpected happens.

Read also: BUSINESS REVIEW: What the Chinese do differently to penetrate, convert and dominate a market

Although, the situation is not completely bad in Nigeria as many have been saved through insurance commitments. The concern, however, is that the figures of those who have suffered, as a result of not appreciating insurance, outnumber the latter.

Car insurance in the U.S.

On auto crashes, alone, not mentioning lives, Nigerians have lost millions of naira that have gone down the drain. Unlike in Nigeria, such loss is unlikely in the U.S. as a car insurance is required by law.

In today’s world, there are different insurance policies. It could be health, auto, life, medical malpractice or even kidnap and ransom (K&R). For each, the premium is determined by the insurer (i.e. the insurance company).

In the above case, Mr Dike will be charged by the insurer. This charge, in technical terms, is the premium. While premium is amount paid to be insured, policy limit has to do with the period the policy covers for. In insurance, higher limits attract higher premium. Mr Dike could have his car insured for 6 months or choose 12 months policy limit. It all depends on his purse and choice.

On deductible, this is the amount a policy-holder must be ready to pay in order to make claims the moment a need arises. When Mr Dike approached the insurance company, he would have been informed on his responsibilities to make the contract hold. One of those responsibilities is the deductible.

If Mr Dike is insuring his car against theft, for instance, and his car is worth 1 million naira; he might have to accept a deductible of 500k while the insurance company takes care of the remaining 500k. This is based on terms while entering for the policy.

Par adventure, Mr Dike’s car got stolen, it means that Mr Dike must tender 500k to the insurance company to process his claim. At the end, he gets the 1M which is the worth of his stolen car in return. Deductible, like policy limits, varies and equally determines the premium. For high deductibles, premium is low.

Imagine a number of property lost to the many fire outbreaks in Onitsha, Katanguwa or the recent Balogun market were insured, policy-holders would not have had to bear the total loss as they would simply move on to lay claims.

With the foregoing review, the Nigerian mentality which is customarily resistant to contracts such as insurance for its uncertainty leaning, perhaps, will change. And, going by recent shocking happenings, it is, hereby, envisaged that this would spur more people to sign up with an insurer.