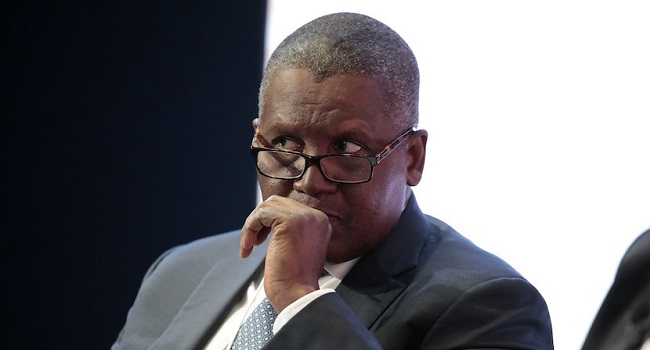 Some aggrieved Indian workers at the Dangote Oil Refinery Company in Lagos have cried out in a video on YouTube, claiming that they were being forced to work without pay and protection from the COVID-19 pandemic.

The workers, in the video published on Saturday, called on their Prime Minister, Narendra Modi, and Minister of Home Affairs, Amit Shah, to take necessary steps for their safety.

According to them, They were employed by GTA Power Mech Nigeria Ltd., a joint venture between Power Mech Projects Limited and Skipper T&D undertaking projects in Africa.

A man, who spoke in a foreign language on behalf of the group, said: “We, the citizens of India, are speaking from Dangote Refinery, which is situated almost 60km away from Lagos in Nigeria. We are workers of the Dangote Refinery.

“The whole world is suffering from coronavirus, which is a global pandemic. Nigeria has also announced its lockdown. During this lockdown, the workers of Power Mech Company are being forced to work. The staff here are forcing us to work through physical violence.

“We request our Home Minister, Mr Amit Shah, and Prime Minister, Mr Narendra Modi, to kindly understand our problems and help us get out of this situation by taking necessary steps to protect and save our lives.”

The workers also argued that many workers of other Nigerian companies are not being forced to work as they are abiding by the social distancing and stay-at-home order, adding that though other workers were secure, Power Mech Company had not provided any security for them.

“The people here are forcing us to work by taking us out of our rooms and pushing us into the bus in order to make us work. The company responsible for this is the Power Mech Company.

“We, the people working in the Power Mech Company, have not been paid. The workers have not received any payment since three months and there is no food arrangement made for us. The food which is given is worse (than) those of animals.

“In this situation of the pandemic, they are not saving us from the disease but are trying to kill us of this disease and are pushing us into it so that we die,” they said.

“That video is more than two months old. It’s just an unrelated issue. People are just doing what they like.

“What they are saying is rubbish. Three months ago, was coronavirus there? It is an old thing that is unrelated”, Chiejina said. Watch the video below: