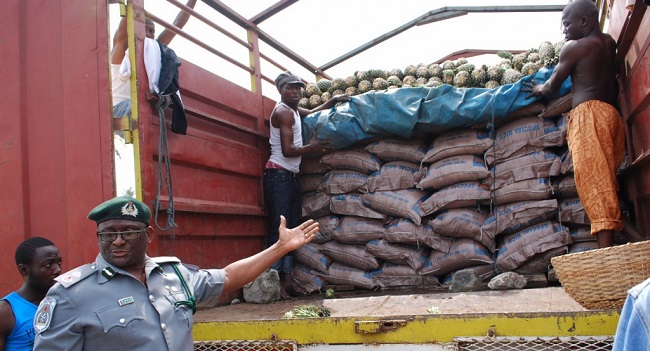 The Ogun State Area Command, Nigeria Customs Service in Ogun State, has announced that it has seized no fewer than 7000 bags of rice belonging to smugglers at Ogun border.

According to him, “The seizure of over 7000 bags of rice for the month of May 2019 is the highest monthly seizures of rice made by the Command during the 2019 fiscal year.

While speaking with newsmen  he revealed  that apart from the seized 7000 bags of rice, it also recovered 372 kegs of vegetable oil (25liters each), 3 units of motorcycles, 5 sacks, 1, 835 pairs of new and 264 pairs of used footwear, 3 bags of sugar (50kg each), 1 sack of secondhand clothing, 411 kegs of PMS (Petrol) of 25 litres and 38 vehicles which included smuggled ‘tokunbo’ cars and others used as means of conveyance of smuggled goods.

“The aforementioned was achieved due to strategic enforcement measures put in place in line with the Federal Government Policy on Agricultural Development in the area of boosting local rice production.

“The Command will continue to dialogue, engage, sensitize and educate the public on social/economic implication of smuggling and on the other hand, the statutory functions of enforcing compliance with strict adherence to rules of engagement will not be relinquished”, he said.

JAMB, stakeholders settle for 160 as cut-off mark for admission