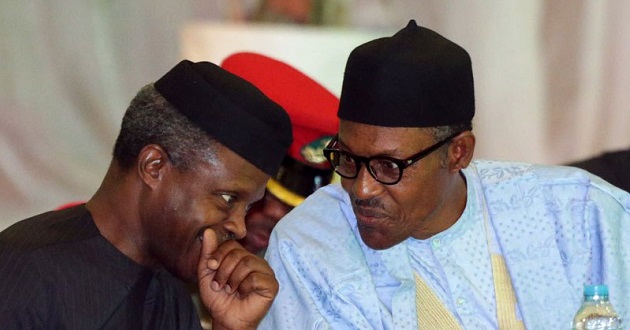 The recent sack of Lawal Daura, the Director General of Department of State Security (DSS), by Acting President Yemi Osinbajo, has heightened the secret battle for the control of President Muhammadu Buhari’s government.

The battle has mainly been between the Action Congress of Nigeria (ACN) and Congress for Progressive Change (CPC) wings of the All Progressive Congress (APC).

The two political parties, alongside the All Nigeria Peoples Party (ANPP) agreed to a merger in 2014. A faction of the Peoples Democratic Party (PDP), known as New-PDP, later joined the merger to ensure victory for the APC in the 2015 general election.

In the formation of government, only the CPC, ACN and N-PDP wings got the top three positions. The ANPP wing had to battle from behind to secure a ministerial appointment after efforts to compensate it with the office of the Secretary to the Government of the Federation hit the rocks.

Ripples Nigeria has however learnt that the inner battle for the control of government had been fought between the CPC and ACN wings having deliberately weakened the ANPP wing and also rendered the n-PDP factor voiceless.

Our reporter who has been following the development, is made to understand that the sack of Daura is now being seen as the height of the secret battle between CPC and ACN for the control of Buhari’s government.

According to our findings, the CPC wing, represented by President Buhari’s uncle, Mamman Daura also has the Chief of Staff, Abba Kyari and the sacked Daura. The trio, it was learnt, constitutes Buhari’s kitchen cabinet which is famous as the cabal. They are said to have run Aso Rock bureaucracy ensuring the swinging of juicy appointments, and contracts, to members of the bloc to the exclusion of others.

A source within the Presidential Villa disclosed that the ACN wing of the merger, represented by one-time governor of Lagos state, Bola Tinubu and the Vice President, Prof. Osinbajo have been secretly battling to decimate the CPC wing.

“Daura’s sack is seen as victory for the ACN wing of APC. It is believed that the government is now firmly in the hands of the ACN wing”, our insider source said.

To achieve this, it was gathered that the ANPP wing of the merger, represented by Ogbonnaya Onu, was decimated and silenced. The wing now lacks a voice within the party as Onu is seen as not being interested in the battle.

Many ANPP members who followed Onu into the merger are disappointed that he could not speak for them and has been unable to influence government to bring them close.

Within Aso Rock circles, Onu is not seen to be a leader that would negotiate anything for those he leads. It is believed that he is too unconcerned about what happens to those he led into the merger.

Also, within the n-PDP wing, only Saraki is now seen as the last stumbling block towards total hijack of government by the ACN wing.

According to our source, the n-PDP wing has been silenced too. “Amechi is silenced. He is only battling to make up for his gamble. Kwankwaso has been frustrated out. Nyako can no longer find his voice. Wamakko is too scared to dump the party. So, the last man standing is Saraki and that is why he is being tackled by Oshiomhole whose main assignment is to ensure total control of the APC by the ACN wing”, our source hinted.

Though the ACN wing of the party has many of its members appointed to juicy positions in government, the leadership of the wing is still not comfortable that the government is effectively in the hands of the CPC wing.

According to our source, the CPC wing believes that the ACN wing should not be allowed control of government because of the fear that if it does, Kyari and Daura would be removed from office.

That fear became rife with the sack of Lawal Daura by the Acting President recently.

For instance, Ripples Nigeria was told that one of the principal reasons the ACN wing insisted on a contested change of leadership of the APC was to enable it regain control of the party having seen John Odigie-Oyegun as very closely tied to the CPC wing and the cabal.

Read Also: 2019: Unlike Buhari who lied, I’ll sign an undertaking to serve only one term— Atiku

Though the cabal attempted to resist the change, they however foot-dragged so as not to be seen to interfere in party administration. They however fell back on control of government because it did not want an open confrontation with the Lagos ex-governor.

The cabal had always believed that with its hands on the levers of government, it will be able to swing the party leadership to its side and still control all apparatus of government.

However, the reality seems to be proving it wrong. With Daura sacked, the group is now feeling stripped. It is also afraid that with the ACN wing taking strong hold of government, the days of CPC wing in Aso Rock are only but numbered.

“They fear Tinubu. The fear that if he comes too close, he will make demands and one of such will be their sack. That is why they want to shield the President from him. But with re-election in focus, the President will need Tinubu much more than he will need them. So, he may sacrifice them and allow ACN wing run things for his re-election”, our source noted.

As it is now, the ACN wing seems to be winning the secret battle for the control of Buhari’s government though it is believed that the CPC wing won’t give up so easily even with a house-cleaning exercise expected to be unleashed with Buhari’s return from his vacation abroad.