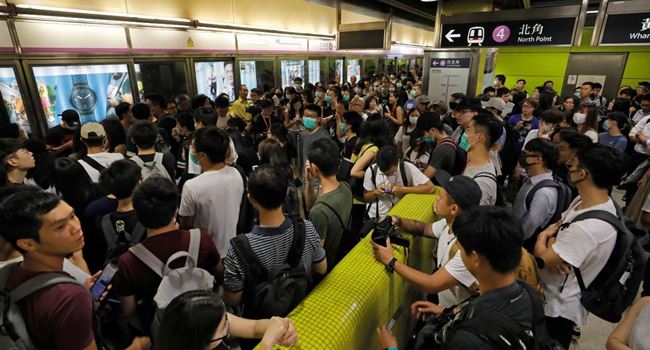 The transport system in Hong Kong was disrupted on Tuesday when hundreds of protesters blocked train services during the early morning rush hour.

The action by the protesters caused commuter chaos, in the latest anti-government campaign which has persisted for over two months.

Activists blocked train doors playing havoc with services and forcing hundreds of people to stream out of railway stations in search of alternative transport.

The development comes after the Peoples Republic of China condemned in strong terms the ongoing anti-government protests in Hong Kong in rare public comments.

Spokesman for Beijing’s top office on Hong Kong policy, Yang Guang supported the leader of the territory Carie Lam noting that top priority is to ‘punish violent and unlawful’ protesters.

Guang also noted that the ongoing protests in Hong Kong is a “serious challenge to the rule of law” and also called on people in the territory “to unequivocally oppose and boycott violence”.