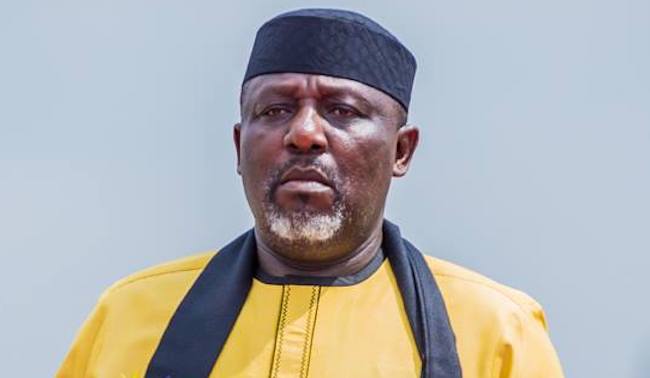 The aftermath of the invasion of Senator Rochas Okorocha’s Abuja residence by operatives of the Economic and Financial Crimes Commission (EFCC) has elicited reactions from both sides with the former Imo State Governor’s daughter, Uloma Nwosu, weighing into the matter.

The commission’s operatives had earlier on Tuesday stormed the ex-governor’s residence in the Maitama area of Abuja to effect his arrest.

The operatives, who positioned themselves in strategic locations within the building premises, asked the Imo West senator to either submit himself for arrest or honour the EFCC’s invitation.

Ms Nwosu gave a detailed chronology of events that transpired on Wednesday, during a live interview on AriseTV monitored by Ripples Nigeria.

According to her, the EFCC operatives launched the invasion without an official warrant or letter of authority while erasing digital evidence when they confiscated CCTV footage of events.

The lawmaker’s daughter further wondered why the anti-crime agency refused to adhere to an earlier court ruling mandating a restraining order with a pending court case scheduled for May 30.

“There is a court case for the May 30 with a restraining order pending the appearance so why the rush? Let them show proof via paper trail. Now they are saying they arrested him to invite him which is unheard of.

“They also carted away with the CCTV cameras; why go with it if the operation is legal? My mum was beaten up and there are video proof of this.

“The wrong narrative is that Okorocha is not above the law and didn’t adhere to judgements but the EFCC is also not about the law and they flouted court judgements several times.

“Counsel Wole Olanipekun is currently on the matter but there was no history to this so he is trying to understand the reason for the invasion since everyone was waiting for the next court date. He is in talks with the EFCC right now. His Excellency is a law abiding citizen and we allow the law take its course,” Ms Nwosu clarified.

Nwosu also confirmed that Okorocha appealed to the EFCC operatives in order to meet up with an appointment regarding a screening of presidential aspirants of the ruling All Progressives Congress, but he was rebuffed.

She said, “I was at the residence. His Excellency Okorocha was getting ready for the APC screening and I was supposed to accompany him.

“They said they were from the EFCC to invite Okorocha for questioning and we asked for a warrant but they say they don’t have any such document. They promised it won’t take too long.

“But due to their forceful nature, we called to the lawyer who asked them the reason which they repeated that they just want to have a talk with Okorocha. They confirmed whether they had a pre agreement which they confirmed negative.

“Okorocha, however, pled to allow him go for the screening which they refused. The EFCC said they had been instructed to bring him at all costs with an ultimatum of 30 minutes lest they enter forcefully.

“They beat my younger brother, broke the bulletproof door after shooting teargas canisters to disperse the crowd.

“Okorocha was not resisting arrest because the visit by the EFCC was not official. He simply requested a court order which they didn’t present.

“He never jumped bail because he is not a flight risk. I can tell you categorically that there was no search warrant. The EFCC officials stated that to the newsmen on the premises.”

The EFCC had equally explained why its operatives raided the Abuja home of Okorocha, on Tuesday.

The commission had in January filed a 17-count charge of fraud against Okorocha at the Federal High Court, Abuja.

The EFCC accused Okorocha and six others, including a member of the All Progressives Congress (APC), Anyim Nyerere Chinenye, of conspiring to steal N2.9 billion belonging to the Imo State government.

“Operatives of the Economic and Financial Crimes Commission (EFCC) on May 24, 2022, arrived at the Maitama, Abuja home of a former governor of Imo state, Senator Rochas Okorocha, to effect his arrest.

“The move followed the refusal of the former governor to honour invitations after jumping the administrative bail earlier granted him by the Commission,” the EFCC said.