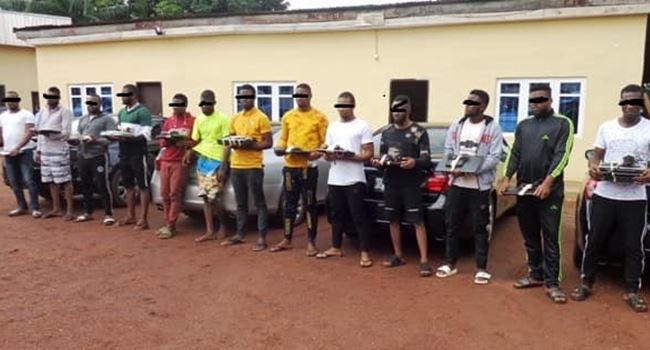 The Economic and Financial Crimes Commission (EFCC) on Tuesday said no fewer than 167 cyber-criminals popularly known as “Yahoo boys” had been arrested in its joint operation with America’s Federal Bureau of Investigations (FBI).

The arrests according to the commission were made from August 12 till date.

The anti-graft agency also said it recovered four exotic cars, plots of land in choice areas in Lagos, a property in Abuja as well as sums of $169,850 and N92m.

The EFCC Director of Operations, Mohammed Abba, made this revelation during a press briefing by EFCC/FBI in Lagos.

Abba, who addressed the press on behalf of the EFCC acting Chairman, Ibrahim Magu said the three-week EFCC/FBI Operation Rewired “was designed to intercept and interrupt the global network of Internet fraudsters.

He said, “Before now, as you are all aware, we had relentlessly launched intensive investigative actions against the infamous Yahoo Yahoo Boys, culminating in various strategic raids, an onslaught on criminal hideouts, prosecutions and convictions.

“I am happy to inform you that our efforts in coordinating the EFCC/FBI joint operations in Nigeria recorded tremendous successes leading to a number of arrests, seizures and recoveries. The suspected fraudsters arrested in the course of the operations will be prosecuted accordingly.”

Abba urged Nigerian youths to “shun crime and its alluring temptation because it will always end in sorrow and regrets.”

The Legal Attaché of the FBI at the US Embassy, Uche Ahmadi, explained that it became necessary for the FBI to seek international collaborations after “our global reporting Internet fraud body, IC3, received 20,373,000 Business Email Compromise complaints with losses of more than $1.2bn in 2018.”

Ahamdi added that the FBI had to resolve in partnering  investigative agencies in Nigeria, Ghana, Turkey, France, Italy, the UK, Japan, Kenya and Malaysia, with a view to disrupting the activities of BEC schemes “that target and harm American businesses.”

He said with the collaborations, the FBI would track down Internet fraudsters anywhere around the world and prosecute them wherever they are located.

“The global goal of this operation is to send a message to all who participate in the BEC scheme that they will be caught and prosecuted, regardless of where they are located; kind of like the EFCC logo that says, ‘EFCC will get you wherever you are’,” Ahamdi said.