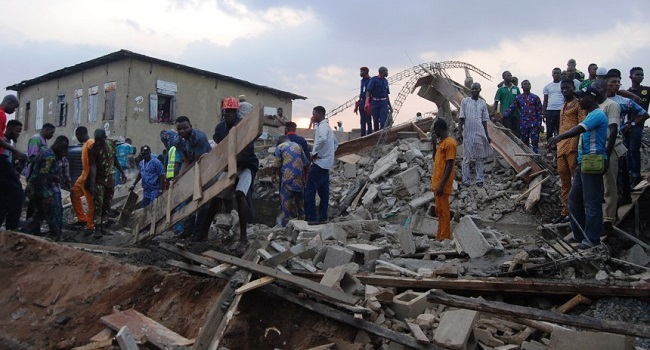 Eight persons have been injured after a two-storey building under construction collapsed in Ibadan, the Oyo State capital on Tuesday.

It was gathered that the building located on Eleyele road in Jericho area of Ibadan collapsed around 4pm.

Speaking with news men, one of the bricklayers at the site, Kazeem Adebayo, said concrete casting on a portion of the building had started when it gave way.

Adebayo said that a portion of the building began to give way around 3.30 pm but they were ordered by the engineer to keep working before the building finally gave way.

An official of the Nigeria Security and Civil Defence Corps (NSCDC), Dada Abimbola, who revealed that there were no fatalities, added that the injured had been taken to Jericho Specialist Hospital for treatment.

A representative of the Architect Registration Council of Nigeria, Mr. Olatunji Bolu, said an investigation was ongoing to determine the cause of the collapse.