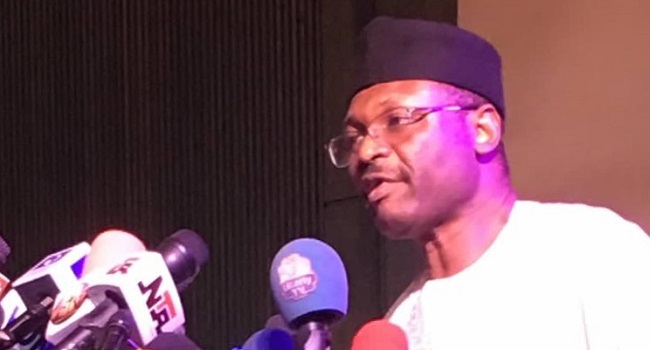 The Independent National Electoral Commission shed light on what led to the postponement of the 2019 general elections few hours before commencement of voting.

The Chairman of the electoral body, Prof Mahmood Yakubu, while addressing stakeholders at a meeting in Abuja on Saturday, pointed at fire incidents that ravaged it offices in Abia, Anambra and Plateau States as one of the reasons the elections were postponed.

Prof Yakubu also blamed some late court judgements that altered its preparation for the elections, adding that the judgements ordered the commission to add some parties on ballot papers that were already printed.

According to him, the commission was able to address some of the unforeseen challenges but they had a negative effect on the overall planning of the polls.

“In this regard, the commission has been sued or joined in over 640 court cases arising from the nomination of candidates. As of today, there are 40 different court orders against the commission on whether to add or drop candidates.

“The net effect of these is that there is usually roughly a one-month window for the commission to print ballot papers and result sheets and either fly or transport them to several destinations until they finally get to each polling unit.

“Unfortunately, in the last one week flights within the country have been adversely affected by bad weather. For instance, three days ago, we were unable to deliver materials to some locations due to bad weather.
“We therefore had to rely on slow-moving long haulage vehicles to locations that can be serviced by air in spite of the fact that we created five zonal airport hubs in Abuja (North Central), Port Harcourt (South South and South East). Kano (North West), Maiduguri and Yale (North-East) and Lagos (South-West) to facilitate the delivery of electoral logistics.

“In all three cases, serious disruptions were occasioned by the fire, further diverting our attention from regular preparations to recovery from the impact of the incidents. In Isiala Ngwa South, hundreds of PVCs were burnt, necessitating the recompiling of the affected cards and reprinting in time to ensure that the affected voters are not disenfranchised. I am glad that all the cards were quickly reprinted and made available for collection by their owners.

“In Qu’an Pan Local Government Area, our entire office was razed, destroying all the materials prepared for the elections printed register of voters, ballot boxes, voting cubicles and several electricity generating sets. ll Registration Areas and over I00 polling units were affected by the tire. We recovered quickly and have since replaced everything destroyed. In addition, we secured a suitable building from which to conduct the elections.

“Perhaps the most serious was the fire incident in our Anambra State Office at Awka, which destroyed over 4,600 Smart Card Readers being prepared for the elections. These Card Readers take at least six months to procure. Despite this setback, we have practically recovered from this by mopping up every available card reader.”