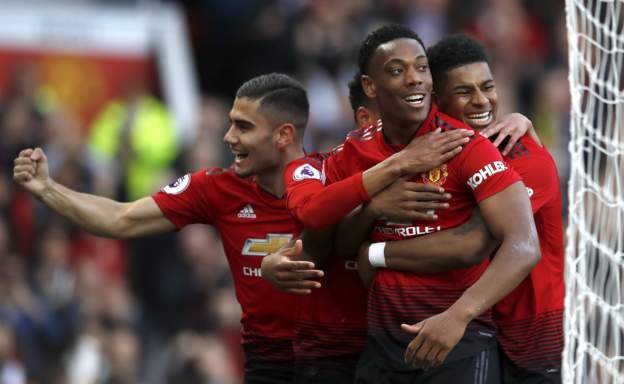 Manchester United survived a late scare against Watford in the Premier League on Saturday as the Red Devils held on to win 2-1 at Old Trafford.

Marcus Rashford fired the hosts ahead in the 28th minute before Anthony Martial made it 2-0 about 18 minutes from time.

But Watford fought to pull one goal back at the stoke of 90 minutes and continued to push for an equaliser.

United held on to the lead and finished off a fine win – the first game for Ole Gunnar Solskjaer since his confirmation as a permanent manager.

At the King Power Stadium, Super Eagles duo of Kelechi Iheanacho and Wilfred Ndidi were both in action for Leicester City.

Ndidi played the entire game while Iheanacho was a 90th-minute substitute as the hosts bagged a 2-0 victory over their visitors Bournemouth.

Wes Morgan put the hosts ahead in the 11th minute before Jamie Vardy sealed the victory in the 82nd minute by heading Youri Tielemans’ excellent cross.

The Foxes have now won three consecutive games since Brendan Rogers took over the side as manager.